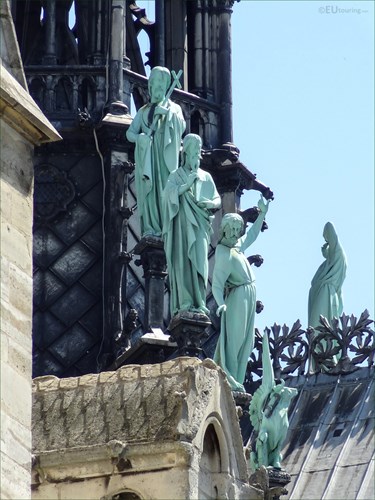 During Past Master Sophie MacCarthy's year as Master in 2010 there was a talk given by Deirdre Westgate on a 19th century French sculptor and stone carver called Victor Geoffroy-Dechaume. He was Past Master MacCarthy's great-great grandfather who worked with the architect Violet Le Duc on the major restoration programme of cathedrals and churches in France during the second half of the nineteenth century. One of the major projects was Notre Dame Cathedral in Paris and as well as re-carving many of the statues of saints and kings that one sees on the facade, Victor was also responsible for creating 12 statues of the apostles, each one 3 meters high and made of beaten copper (for lightness), positioned on the roof. These statues would have been completely destroyed by the fire on 15 April 2019 had they not all been airlifted off just three days before, in advance of renovation work. Sadly however, as we all saw, the spire was destroyed in the inferno. It remains to be seen if it will be rebuilt or not.