Letter to the Guild from Amsterdam 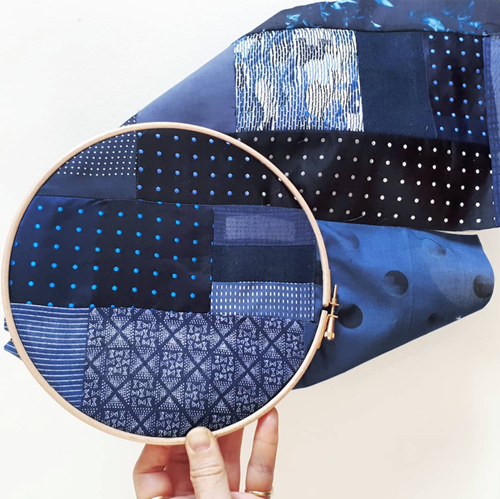 Textiles have woven their way into my life from an early age. At 18, I lived in a village called Sarnath, in North India just outside the city of Varanasi (Benares) famous for being a place of deeply spiritual significance and renowned for its weaving industry. I have read that when the Buddha died, his body was wrapped in the wild silk and cotton cloths of Varanasi, owing to their softness and fine texture.

I taught in a primary school and helped in an ashram for those who had suffered from leprosy. On my days off from teaching, I took rickshaws into the city and visited weavers, and basked in shimmering pleasure at being shown silk saris with gold brocade, cotton cut work and hand loom cloth. And so my appreciation of cloth was enriched.

I have worked as a Print and Textile Designer within the fashion industry for 11 years and currently work freelance. After graduating from a degree in Textiles at Leeds I was torn between working within historic textiles - to preserve them or to create them? I had volunteered as an Assistant in the Fashion and Textiles Department at the Victoria & Albert Museum while studying for my degree, and later as a Research Assistant for the exhibition of Quilts 1700-2010: Hidden Histories, Untold Stories. But as I missed designing, I decided to set up a small studio in the porch of my parents’ house in Suffolk, where I worked on a textile print collection, which I sold to Paul Smith later that year. It was a fortuitous combination of a job opening and a meeting with Paul himself, which lead to my being offered my first full time position in the design department at Kean Street.

Here it was my job to design the print artworks for the menswear collections. Each season I saved the strike offs and carefully stowed them away. Four years later I moved to Amsterdam, to design the print and graphics for Calvin Klein, Menswear. My collections were added to, with the addition of more from visits to factories. In particular, a silk factory in Como. 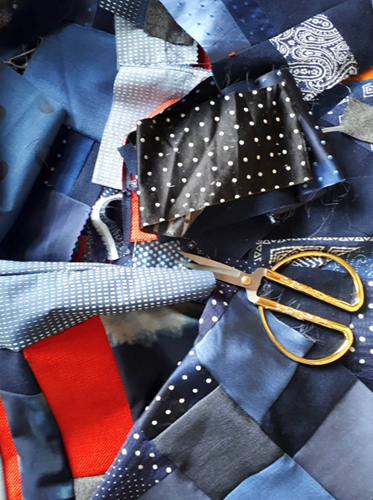 I saved samples, not only for my portfolio but because they seemed too precious to be thrown away. My boxes contained pieces of wool suiting, cotton shirting, silk blankets -which are used to select weaving patterns for ties; prints of clouds, tidal patterns of the North Sea, polka dots from reflections of street lights on Upper Street in the rain, hand painted florals and wild brushstrokes to name a few. Quite literally a patterned history of my career in textiles.

In November, my father, who was a wonderful abstract painter, died. I spent a few months at home in England and returned to Amsterdam in early Spring to focus on work but soon discovered that Covid 19 was starting to creep in and everything began to grind to a halt - my interviews and meetings were cancelled, companies began to delay their collections and factories were facing enormous difficulties with cancelled orders and surplus stock. So in need of a project and a distraction from the unraveling crisis, I found solace in textiles. I unpacked the collections and to my surprise, found a piece of blue and white Laura Ashley cotton print left over from a quilt made by my Grandmother, Rosemary Gwynne-Jones (Painter). The day before the libraries closed I happened to borrow a book of The Quilts of Gees Bend. It seemed all signs pointed to making a patchwork. 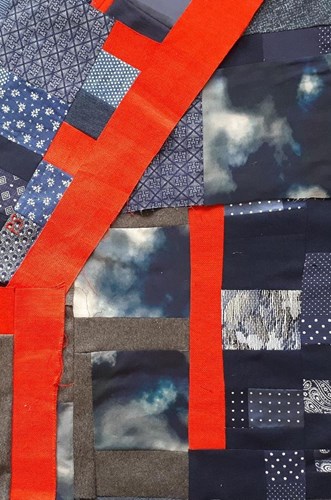 Designing for menswear has of course meant that the colors of navy, black and grey have been mainstays, so I added a contrast of coral red linen and silk. It is by no means a conventional quilt, more like a collage in cloth, each square a different composition.

I am embroidering the initials of great friends lost and those who I have thought about during this time. Bro. Edmund Fairfax Lucy - EFL will be sewn in. It was our friend Ed who introduced, encouraged and introduced me (and my mother) into the Guild in 2012. One of the squares is dedicated to my father. It has a stripe of red, a Suffolk sky line at dusk and his initials of FB stitched into the corner, as well as my 96 year old cousin who lives on his own. 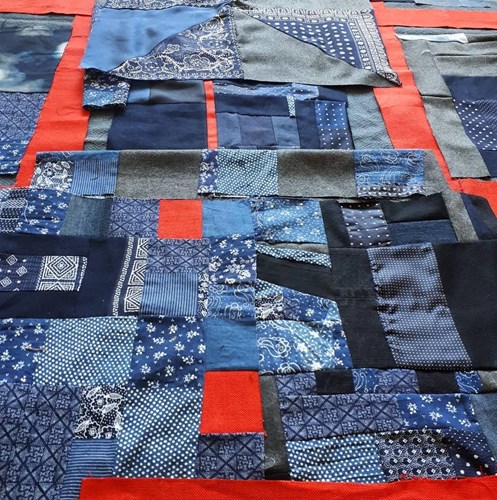 I am at the stage now where I have the main squares sewn and a central medallion composed but have a little way to go to transform it into a quilt. The season has transformed since I started on this and so has the city. I watch the newly arrived Swifts, which circle each morning and notice with a little sadness that the cow parsley is almost over. It has been a most fitting time for a project of both creation and preservation.