The Guild meetings are open to Guild members and their guests only. Meetings start at 7 pm.  Doors open at 6.30 pm.

Thursday 12 January
Master’s Night
Trouble
Fred spent his early life getting into trouble and, from then on, inadvertently causing it and dealing with the consequences. Often oblivious to the fact, he’s going to try and explain to us why it’s not his fault.

Thursday 26 January
Tristram Hunt
Vision & Ambition: the V&A and the cultural mission of museums
Tristram Hunt, Director of the V & A, will consider how the V&A’s civic foundations engendered a world-class collection; a growing family of nationwide museums, and a mission to inspire each new generation. The V&A’s earliest vision still guides its creative ambitions in the modern world.

Thursday 9 February
Assa Ashuach
The humanisation of objects
Assa Ashuach believes we should own less, and what we own must perform better. He focuses on designing objects and their ecosystems, adding the element of time to the physical and visual dimensions of functional things, including an evolutionary aspect which renders them ‘virtually alive’ until they are physically produced.

Thursday 23 February
Trevor Flynn
The Drawing Gym - keeping sketching fit for purpose
Director of Drawing at Work, Trevor Flynn’s richly illustrated talk will show how he introduces freehand drawing programmes into large companies to address the negative impact of computer dependency and to use drawing as a means of enquiry, understanding and knowledge acquisition.

Thursday 23 March
Rungwe Kingdon and Claude Koenig
Pouring hot metal: the continuous evolution of casting technologies
Rungwe Kingdon and Claude Koenig are founders of Pangolin Editions, one of the largest art foundries in the world. They say they owe their success to working with some of the foremost artists of the late 20th and 21st century. Their most recent innovations include digital scanning with drones, virtual reality and 3-D printing.

Thursday 13 April
Ray and Sasha Ward
The cloud of unknowing
After working alongside each other for over thirty years, Ray and Sasha Ward finally started to collaborate. Ray’s droll monochrome everyday drawings floated the mystical air when Sasha turned them into luminous stained-glass panels. This talk will explore the process from each artist’s point of view.

Thursday 27 April
Jaspar Joseph-Lester
Re-working communal life worlds
Jaspar Joseph-Lester, artist and Head of MA Sculpture at the RCA, discusses the revisiting of spaces, ideas, objects and artworks which is possibly the very process that keeps the production and reception of art alive. But what does it mean to be caught in an endless cycle of re-walking, re-working, re-making and re-thinking?

Thursday 11 May
Denise de Cordova and Kathy MacCarthy
Merseyside mates
Rumour has it there’s common ground between the sculptors and life-long friends Denise de Cordova and Kathy MacCarthy. They came from opposite sides of the Mersey, studied and worked in same institutions, fancied the same rocks and waterfalls, but never same men. Both had a squad of sons, believe in honesty, kindness and stamina of making.

Thursday 25 May
Michael Marriott
A side hustle
Michael Marriott is a designer with a furniture training. But he does a few other related things too. One of them is a kind of side hustle that stemmed from an idea that WoodMetalPlastic was a good name for a project. It became a webshop. He’s going to explain all.

Thursday 8 June
Carl Clerkin
Outshining Wes Anderson?
Carl Clerkin applies his dry cockney wit and acute observation to the curation of summer shows at Somerset House concerning urban institutions. With a heart of gold and a humorous, acute attention to detail, his environments have a surrealist edge that would have been at home in the 2022 Venice Biennale. And he’s going to tell us about them and a 25-year drift from furniture designer to artist.

Thursday 22 June
Tomoko Azumi
From Hiroshima to Clapton
Tomoko Azumi tells of her journey, her eyes fully open to the joy of making and the power of the hands. UK, European and Japanese manufacturers show her designs regularly at the Milan Salone del Mobile. She’s found a route back to her love of paper modelling.

Thursday 6 July
Natalie Melton
Making it up
Accidental Executive Director Natalie Melton will reflect on a year of leadership through a state of perma-crisis. Brexit, Black Lives Matter, the pandemic, funding cuts and a recession have accelerated a necessity for action at the Crafts Council. It’s a challenge but as Sam Cooke predicted ‘A Change is Gonna Come’.

Thursday 28 September
Melanie Unwin
The politics of art – the art of politics
Melanie Unwin, former Deputy Curator of Westminster’s Art Collection, will discuss commissioning contemporary art for this important public collection which documents the history, work and environment of across the estate, providing a constant backdrop to parliamentary business. Melanie will reflect on the opportunities and challenges, drawing on commissions she managed.

Thursday 12 October
Tim Carson
Stupid Punk?
From his atelier in Penge, Tim Carson (vocalist in punk band Scrotum Clamp), works predominantly in the field of jewellery. He explores the narrative of displacement and the badge as a political medium. He’s a self-declared punk rocker but doesn’t look like one. And he says ‘if you want to make something of it, you’d better come to this lecture!’

Thursday 26 October
Fred Baier, Freddie Robbins and Cat Rossi
Two Freds and a Cat
Freddie Robins – textile thinker, maker, artist, knitter, collector and educator who rejects craft-art arguments as irrelevant and misplaced borderlines - and the Fredmaster, with Cat Rossi – design historian engaged in researching, teaching, and sharing ideas – who will have a go at orchestrating a conversation between them.

Thursday 9 November
Liz Adams
Stitching and repairing unpromising places across London
Liz Adams of Adams & Sutherland delivers buildings, public spaces and landscapes across London, in each case seeking to benefit as broad a community as possible. Liz is also an expert witness on urban design and architectural quality. She’s adept at understanding both sides of the fierce, sometimes absurd arguments concerning tall buildings which risk delivering a profoundly altered city.

Thursday 23 November
Gareth Neal
A new type of hacking
Good practice emanates from a depth of knowledge, says Gareth Neal. A hands-on designer, he is fascinated by process of both the latest high-end digital fabrication and traditional craft techniques. His carefully crafted furniture pieces are rigorous in concept, environmentally conscious and highly sought after. He’s also a lovely, funny chap and one of my best mates. 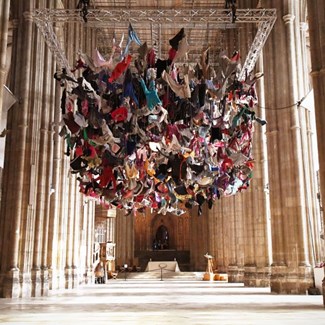