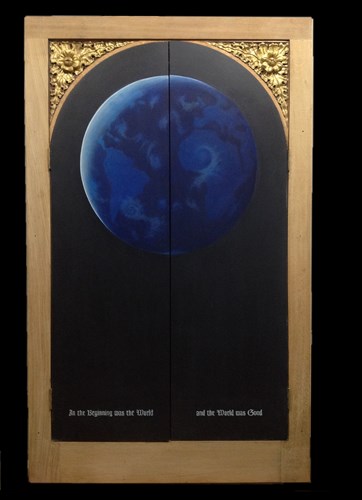 This work is one in a series that I’ve painted about animal rights, starting during the 2001 Foot and Mouth outbreak. It is about the effects of global warming on wild animals, but I finished it during the early stages of the Covid 19 pandemic. And there are certain issues that link F&M, this pandemic and global warming.

The foot and mouth outbreak never reached pandemic proportions, but was a seriously disruptive epidemic that affected humans and animals in adverse ways. Contrary to popular belief, British people still eat products from cattle that have contracted and survived the disease - Argentinian beef, for instance, does not have ‘disease-free’ status, and yet we eat it.

Cattle rarely die from F&M, but lose weight. The British government’s response was driven by market concerns – specifically, that British beef should maintain ‘disease-free’ status, because that would fetch more in the largely European (at the time) marketplace.

Covid 19 started (by reliable accounts) in a ‘wet market’ in China. The viruses of wild animals infected humans via contact and/or ingestion. This is due to the fact that Chinese people traditionally hold beliefs that ingesting wild animal parts can provide them with various health benefits, despite the fact that there’s no scientific evidence to support such beliefs.

What links the two is the fact the difficulty caused by both viruses are human own-goals in the sense that they were brought about by attitudes to animals as a resource, rather than a treasure. Both have also been compared to ‘medieval plagues’ and our difficulties in combatting the human costs have been described in terms of declaring war on these plagues. And yet we invited these plagues ourselves.

Global warming is another ‘own-goal’. Our short-term obsession with market growth has been at the expense of the delicate balance of Nature. The growth of our population means that we now encroach on wild animals’ evolutionary habitats, and even more importantly, we have actually changed the weather by an over-reliance on burning fossil fuels to drive our energy hungry lifestyles. 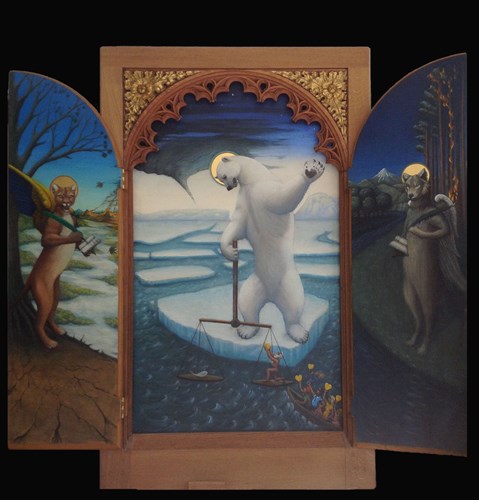 In this five-panelled triptych, I have inverted the roles of Christian iconography, so that the wild animals are depicted like God and two saints – they have haloes and are judging human beings, who still seem oblivious to their own plight despite the fact that they are in danger of extinction themselves.

Although this is a completely original picture, the iconography is borrowed from the ancient Egyptian myth of ‘the weighing of the souls’, where human souls were weighed against a feather. That myth was carried into medieval and early Renaissance painting, but and were converted into Christian iconography.

So this is a moral tale and I hope to sell it in order to raise money for an environmental organisation that champions the rights of wild and domesticated animals. 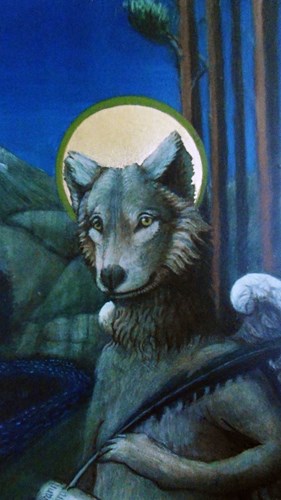