Nicholas Hughes is an artist working in illustration, design, print and wallpaper.

My work should not exist by the majority of today’s standards. It is labour intensive and time consuming to design and make. It is not fashionable. Commercial is not a word that springs to mind. I make it myself, by hand - it is not produced using algorithms and software. 'Mistakes' are not erased from the process but become part of the whole. I mix pigments by eye and instinct rather than to a formula.

When I first approached factories to enquire about producing my designs I was told they did not translate and it would be unrealistic to use their printing methods. After heeding their advice, a patient wait, a compromise - sampling was delivered that was expensive and felt totally wrong. I decided the best course of action was to produce and print the wallpapers myself.

Here, I explain my design process for a bespoke hand block printed wallpaper for a loo and shower room on Cleveland Square in Westminster.

The wallpaper design is composed of two distinct blocks of differing sizes printed as tiles. It features (loosely) startled grasshoppers printed in quartets and framed by oak leaves. Sketches produce lines that are carved into lino, inked, then printed onto rolls of paper. The end result is as much a series of happy accidents as it is a sequence on considered steps. 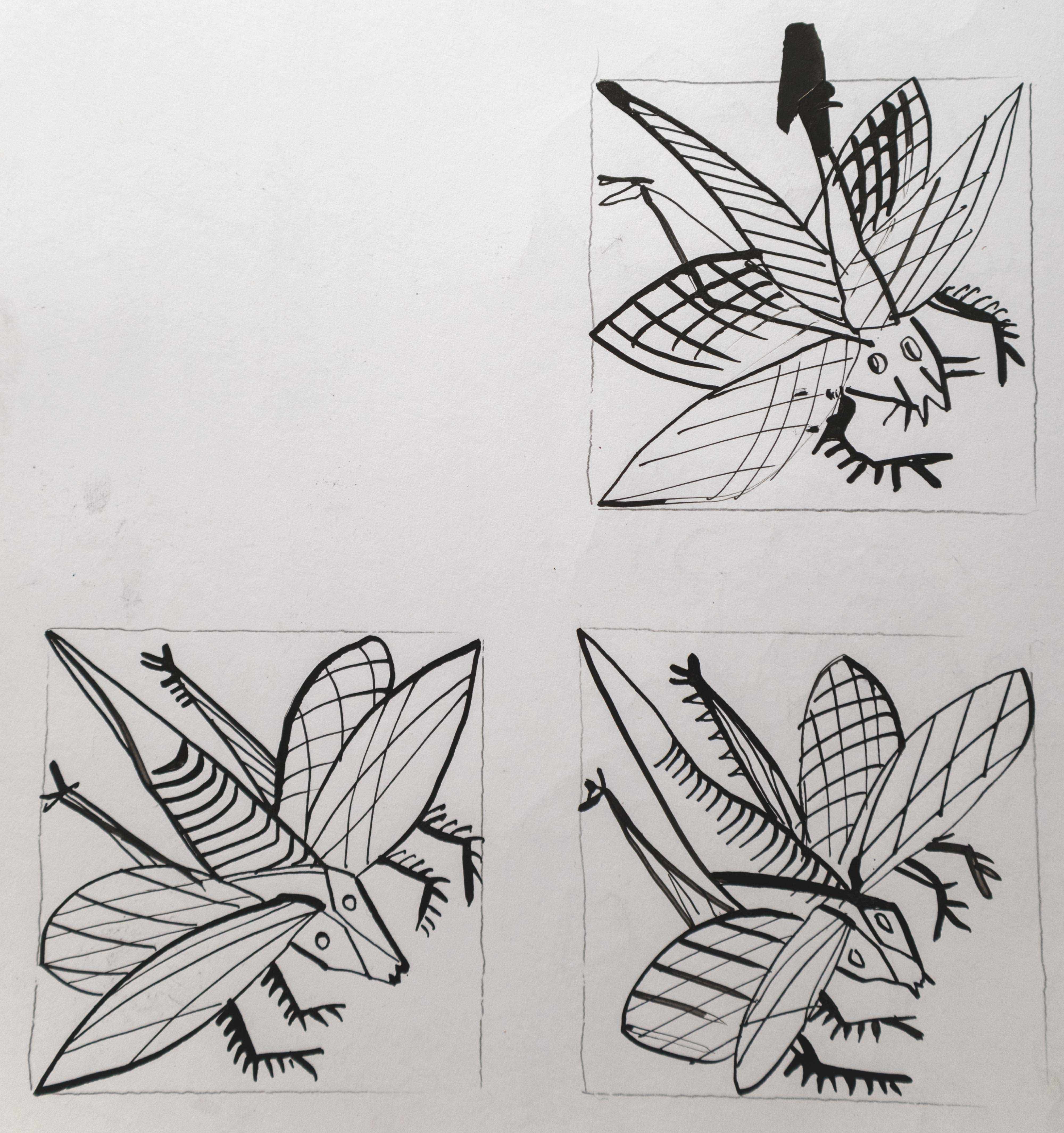 The process starts with drawing; the cruder the better. Sketchbooks are companions and are constantly added to - a scruffy doodle will sit around for years before time allows it to be layered with meaning and rediscovered. An initial and naive idea may grow and make its way into a design. Starting points may be from an artefact or something conjured from memory - it all gets blurred into one thought. With this design I enjoyed the wiggle of a leaf and an insect occupied a squareish shape. A box was put around it with wings pointing into corners making it ideal for a printing block. 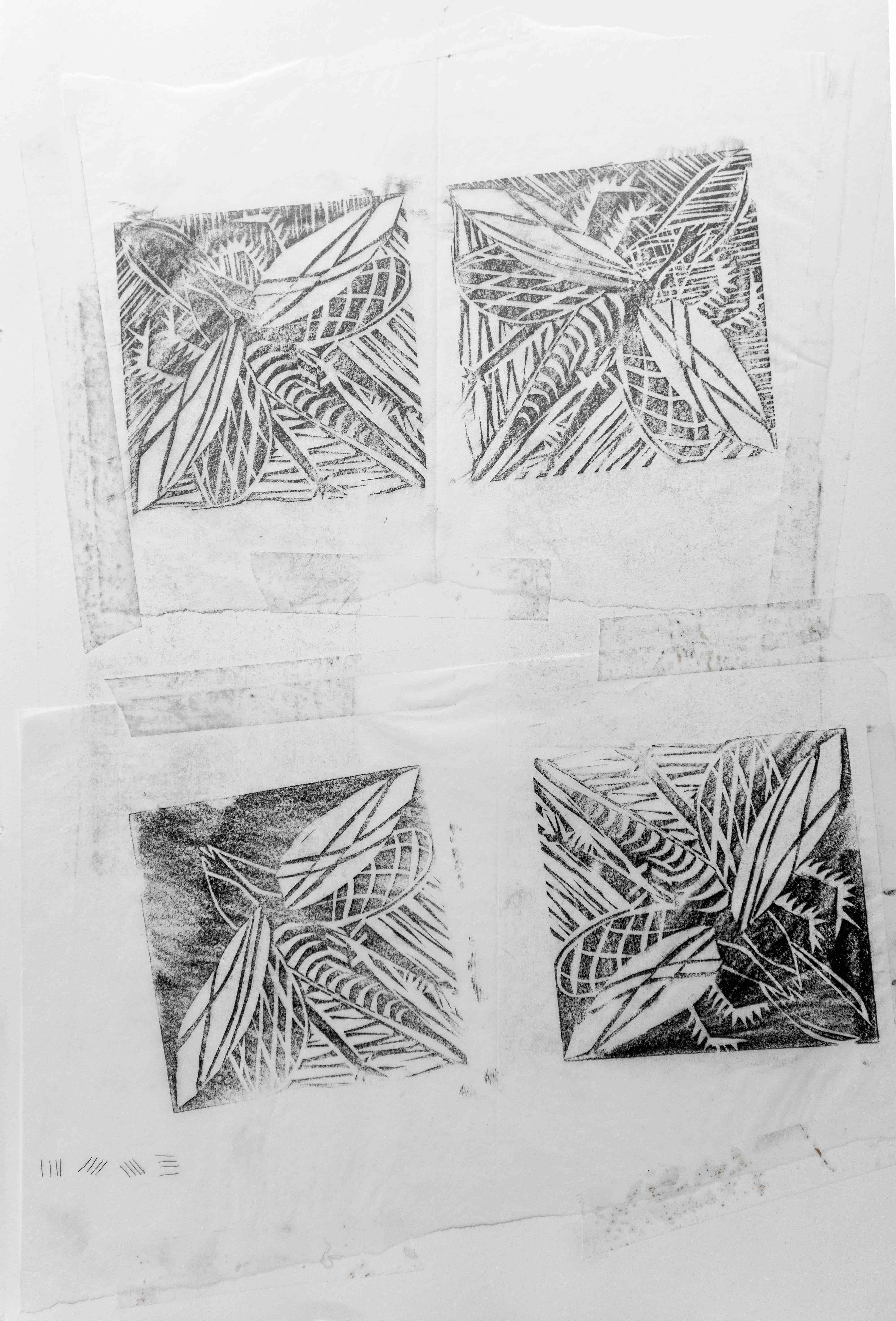 2. Carving of the lino block

I use tools associated with wood cutting rather than for carving lino. To me, the lines produced fall somewhere between drawing and sculpting. I prefer image making that sits outside the hierarchy of what constitutes 'good' and correct ways of drawing and I find these implements free me from being overly precious. The joy in particular mark making can also lead to an outcome. One of my tools produces a fine curve which I was very led by and this mark came to form the midrib and veins of the leaf. 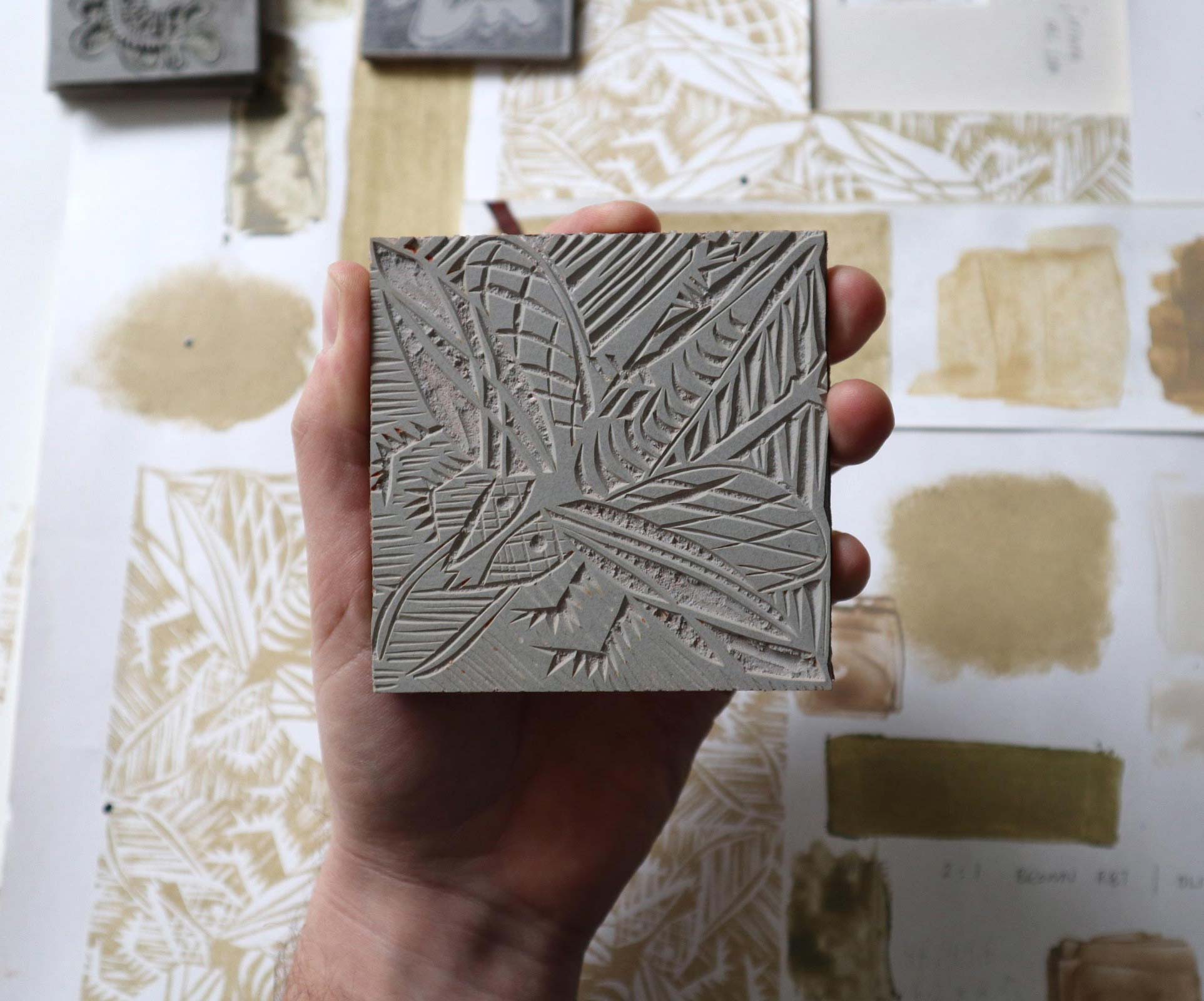 I take rubbings as I cut into the lino to see lines transform to shapes and to keep track of how the design will reveal itself.

With carving, the fear of gouging into the block too deeply, brutally and to the sacrifice of the more delicate gestures already made, helps focus the mind. As does the potential of nipped fingers after a long evening when perhaps I should have already called it a day! I had a Great Grandmother who burnt decorative patterns into timber, (poker work) and I like to carry a notion that whilst other 19th century ladies were sitting in Victorian drawing rooms embroidering with delicate threads as the sunlight fell on their laps, this lady was taking a hot poker to an unsuspecting plank of wood - and creating something of beauty. 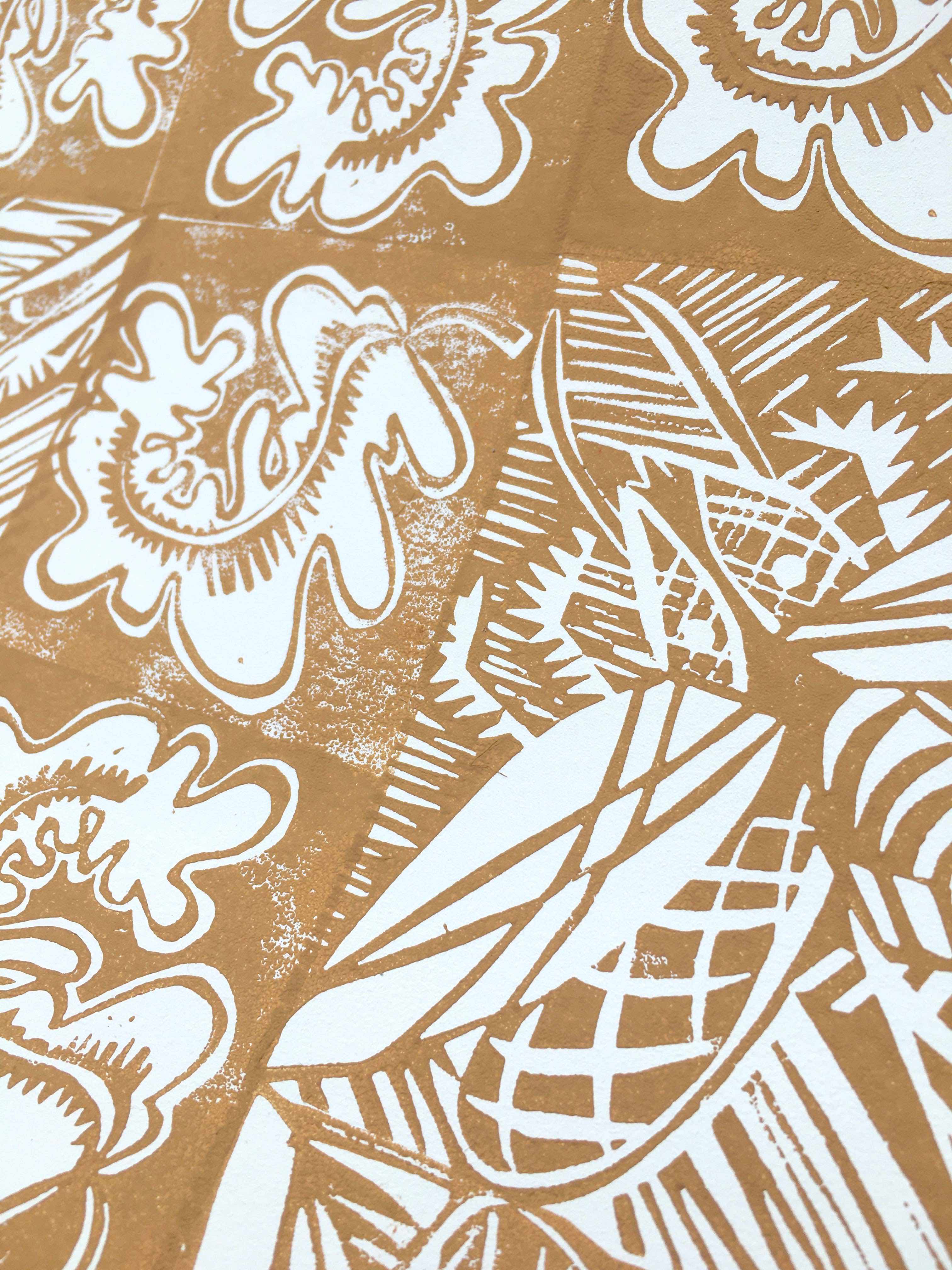 3. First round of printing (colour change)

From the initial round of sampling to the final product almost everything, inevitably, changed - but the spirit was kept. A change in colour - binders and different pigments were sourced to accommodate the environment the paper would be used in. Several additional blocks were cut as finer details clogged more quickly - each printing fewer repetitions than usual before becoming saturated and flooded by the binder. The width I could print on the roll had to reduce. I had to allow for wider trim margins on both sides as the potential of clumsy storage operators and crumpling edges became a reality if the project were to be delayed because of Covid. 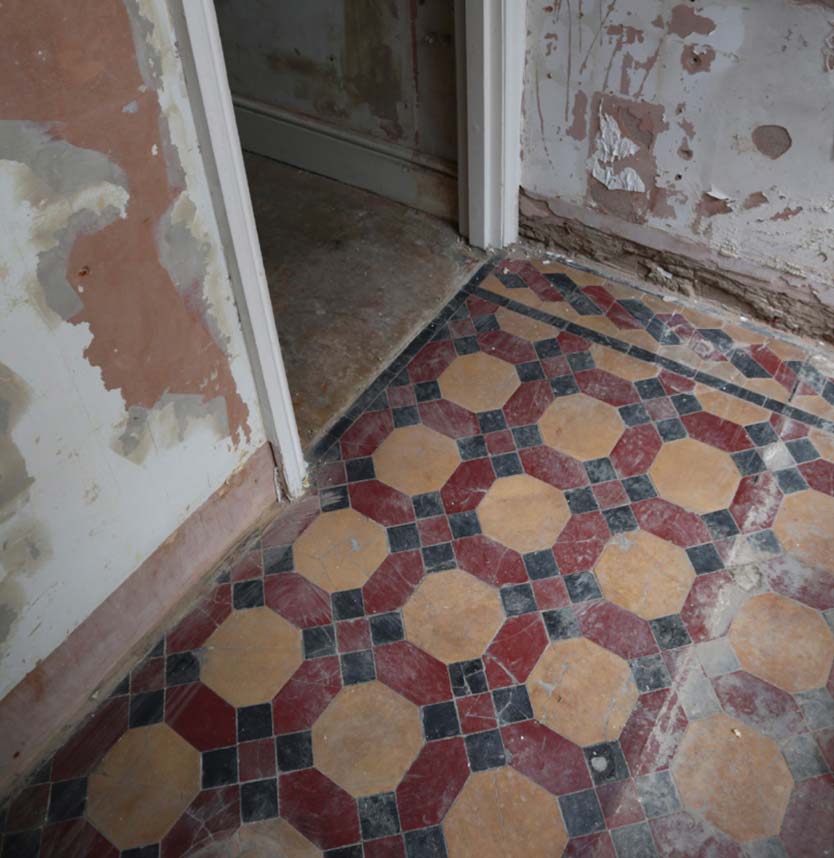 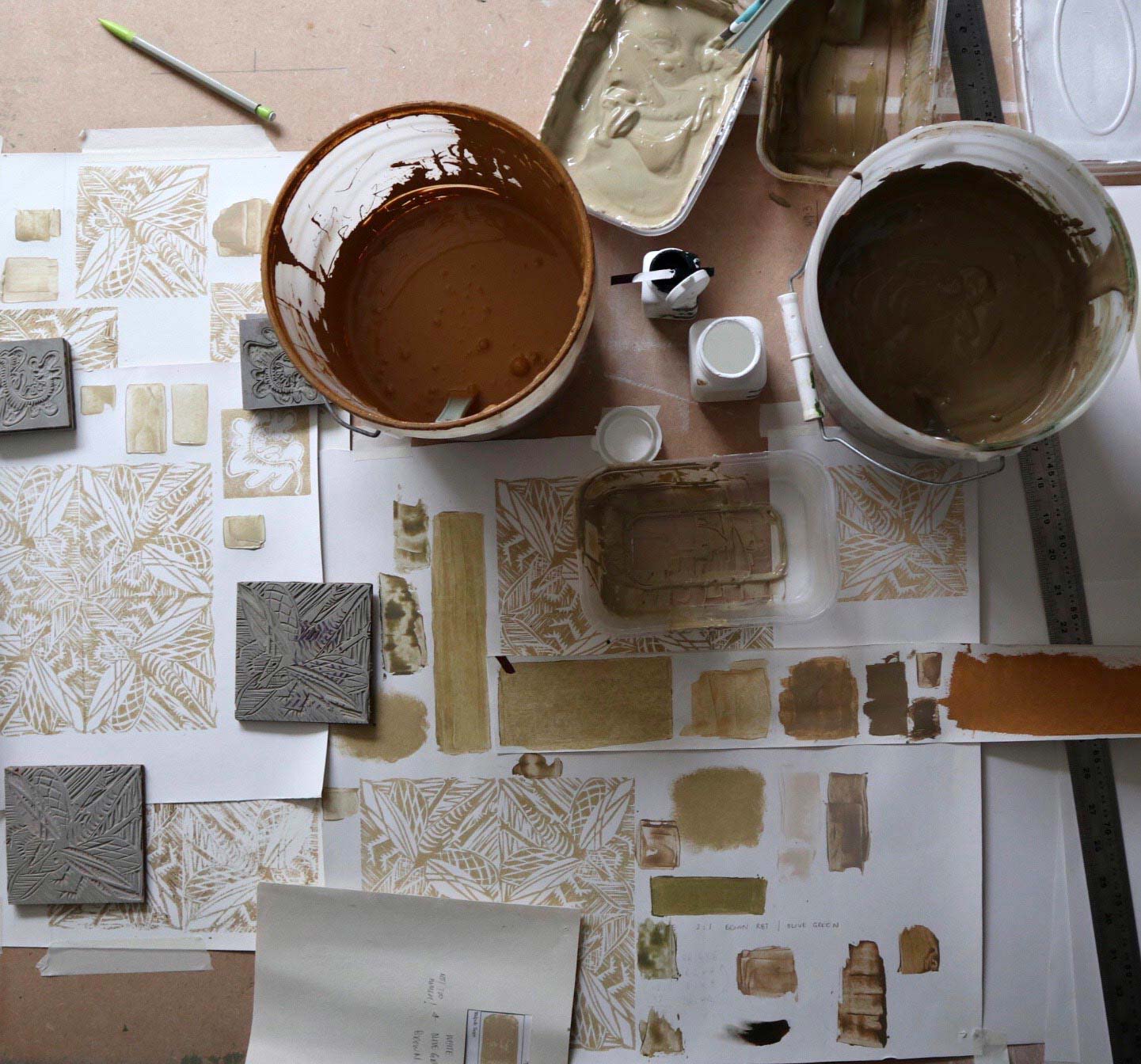 The idea of craft and gesture has come full circle in the digital age and the hand is being valued in new ways. I chose to celebrate the splodge. 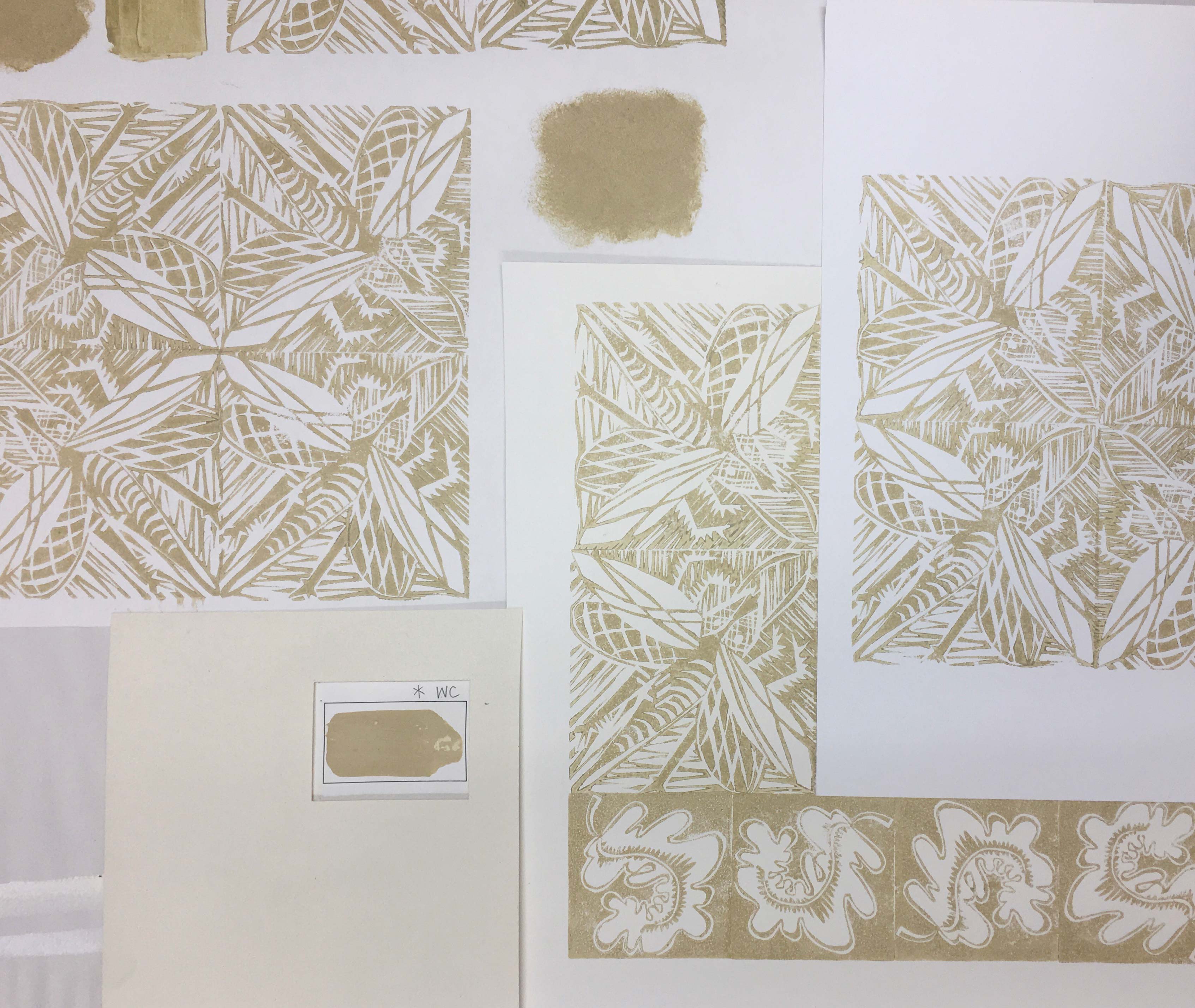 There is a clear distinction between factory made in which a system or mechanical set up once activated marches unquestionably towards its outcome, in exact repetition, and the handmade, where there is a presence of constant consciousness. Sometimes this consciousness slips into another realm and interrupts the system! During the production of this wallpaper there are three 'mistakes' in 3,000 or so individual prints. These I chose to leave in - momentos to wondering thoughts. Perhaps something interesting caught my ear on the radio... and this has been preserved, a moment in time immortalised like a fossil and now sits above the doorway in the clients’ home. 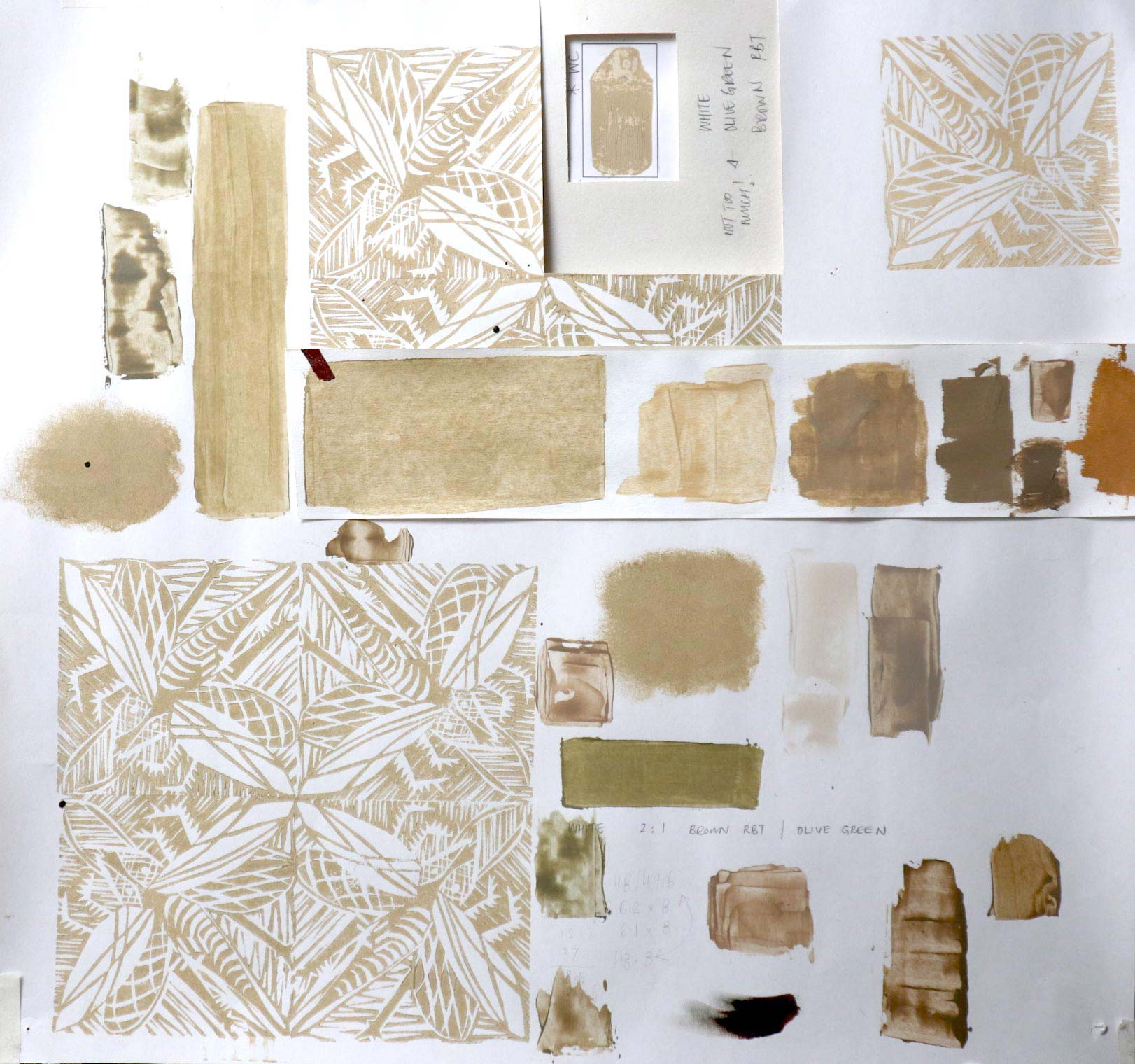 A rudimentary set up on a Winter evening in lockdown - a rigged drying system of poles suspended from the ceiling. I mark the reverse of the blocks to aid positioning. 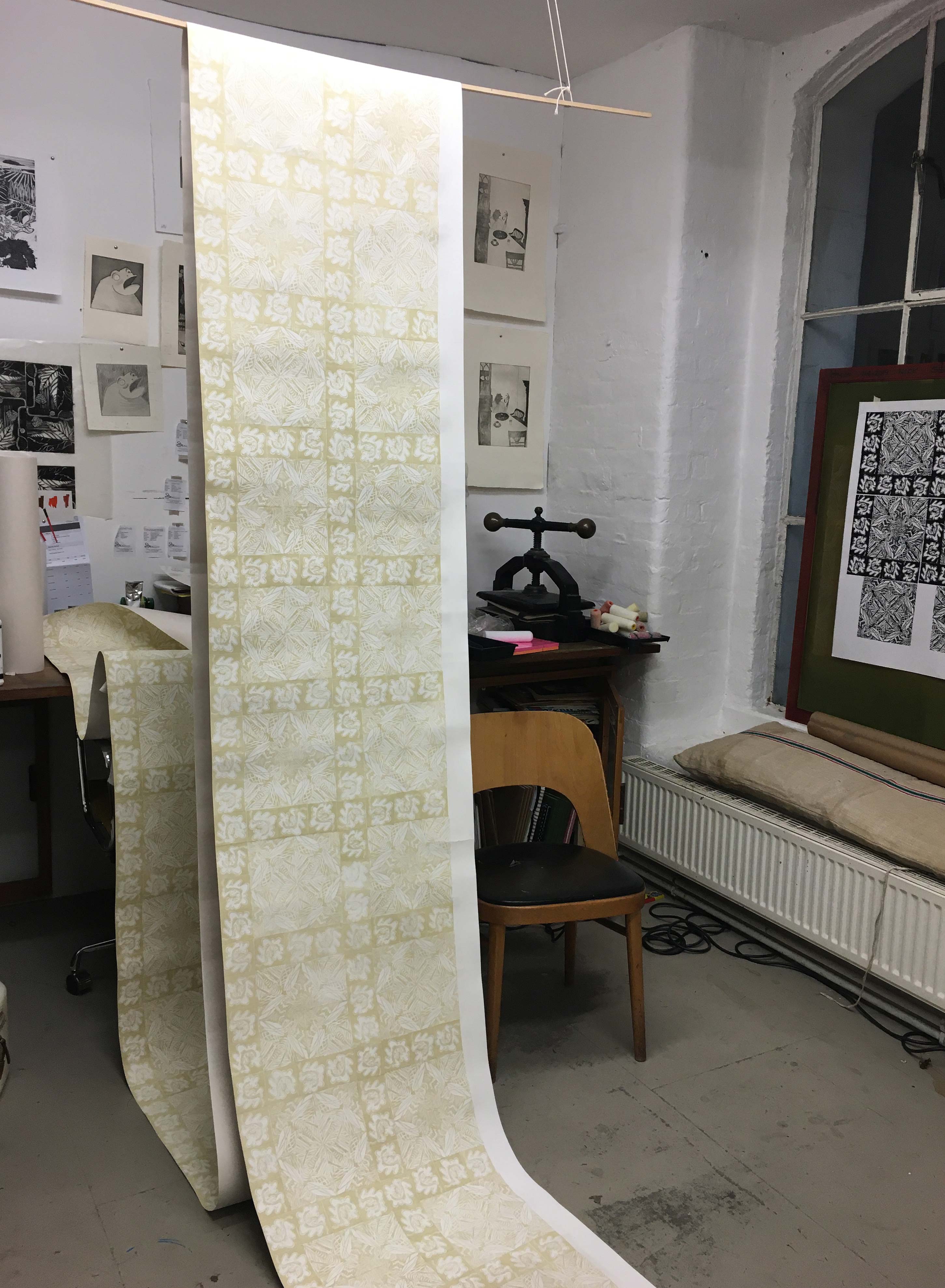 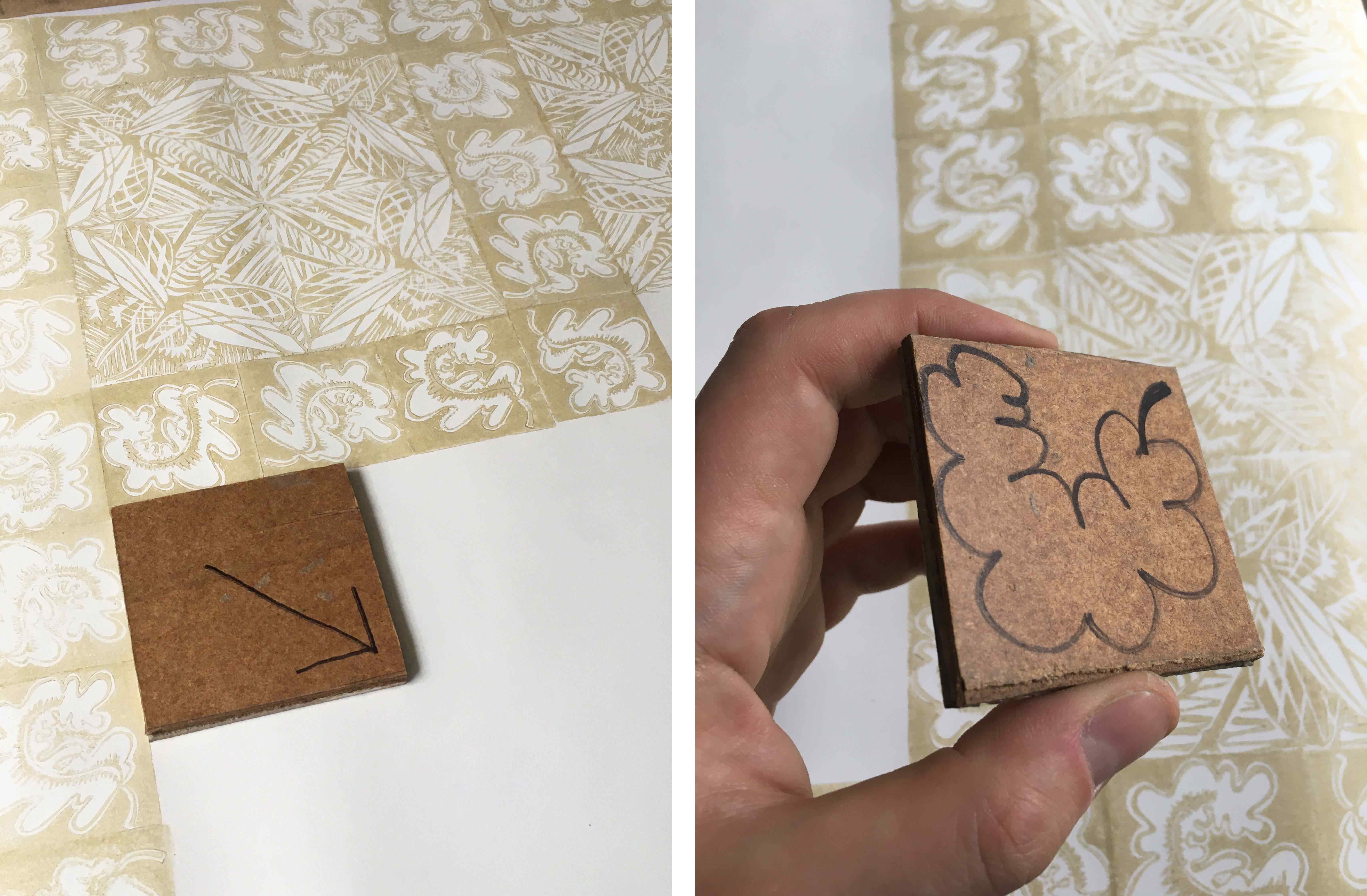 6. The plan with elevations 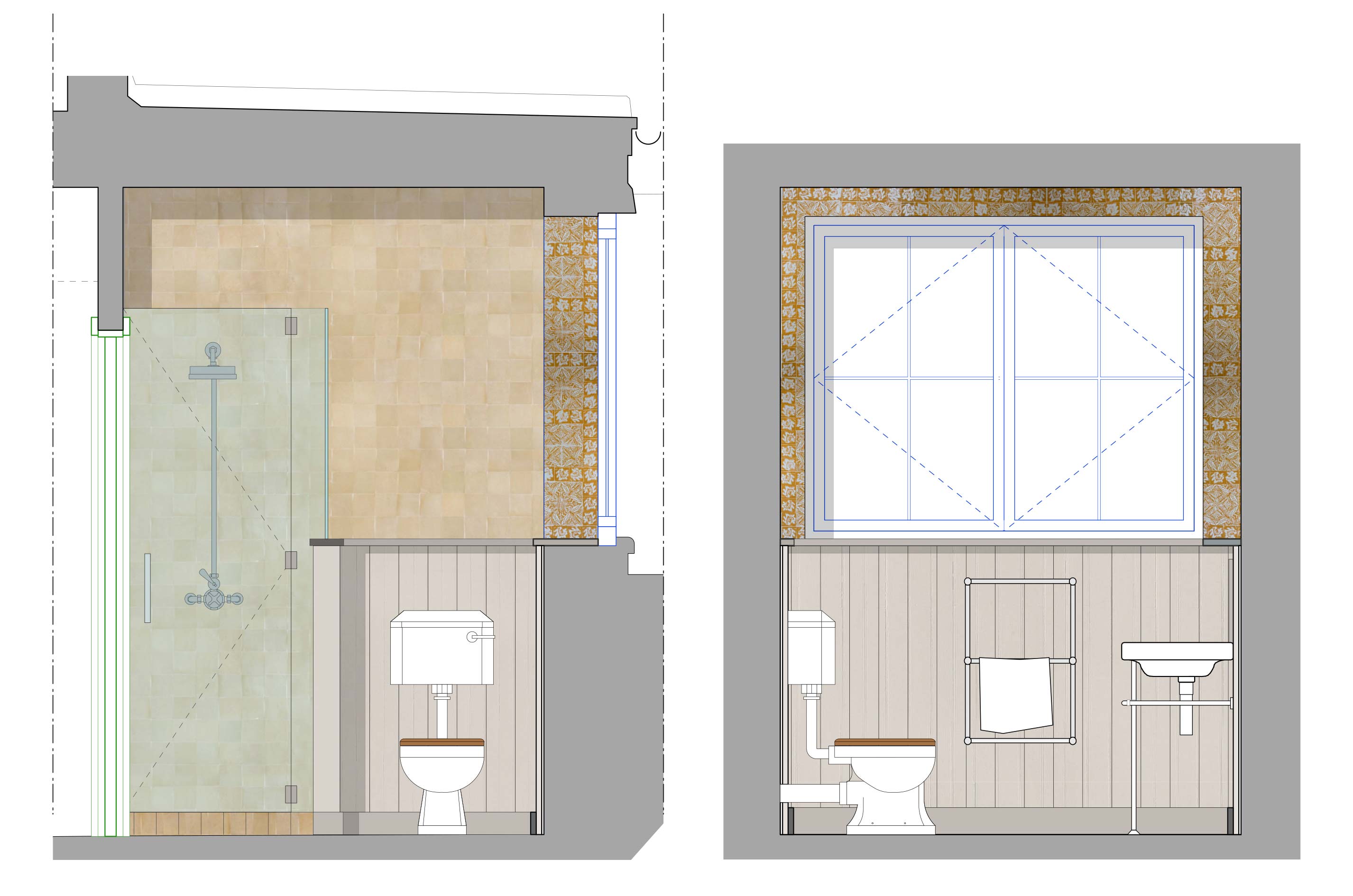 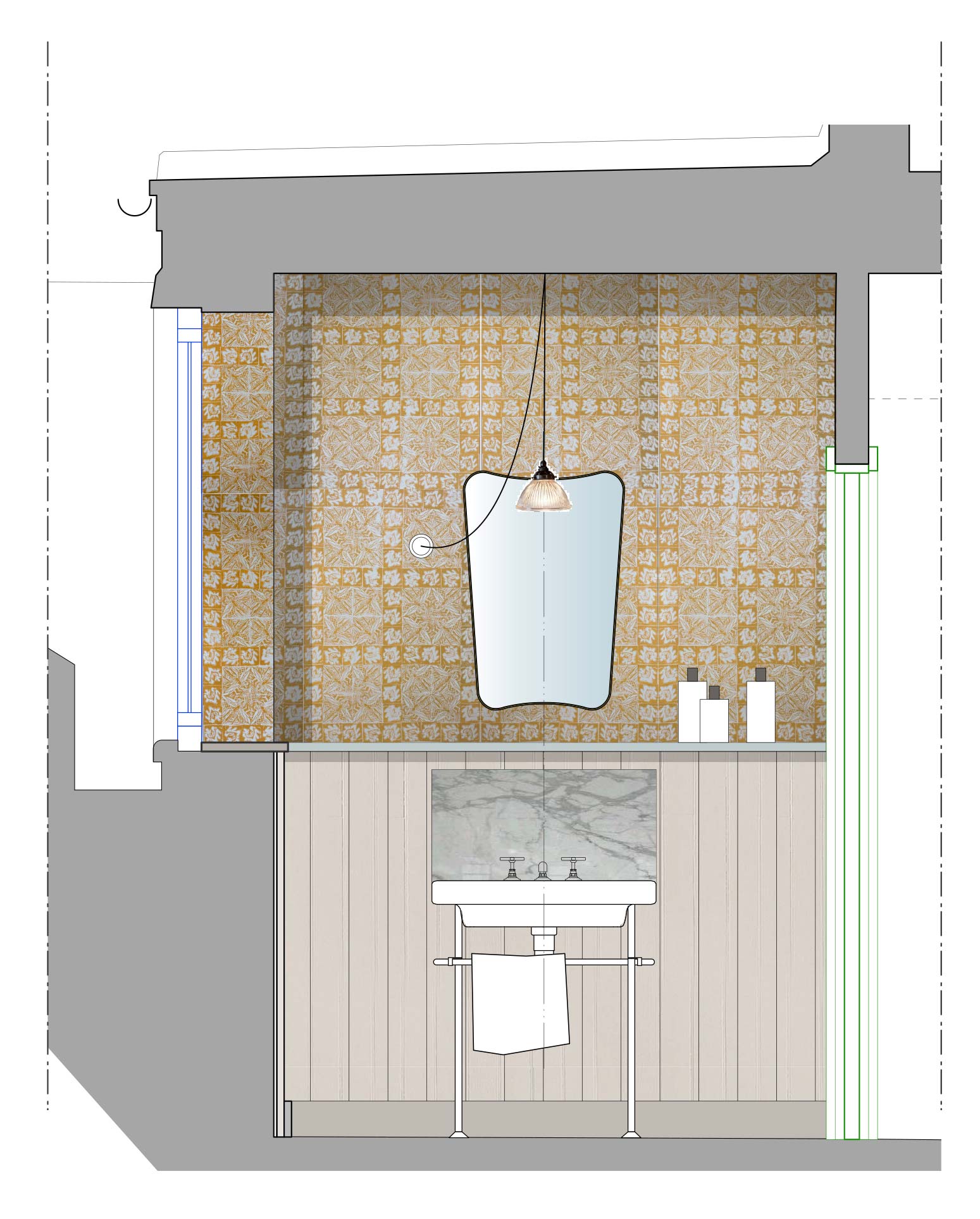 Despite being composed of square blocks, printing by hand and by eye means there are no straight, clinical lines and this helps relax the space. Inherent to the handmade is a familiar wonkiness that unites the palette visually and is kind to the other materials used: painted pine tongue and groove boards, hand cut tiles and figured marble. 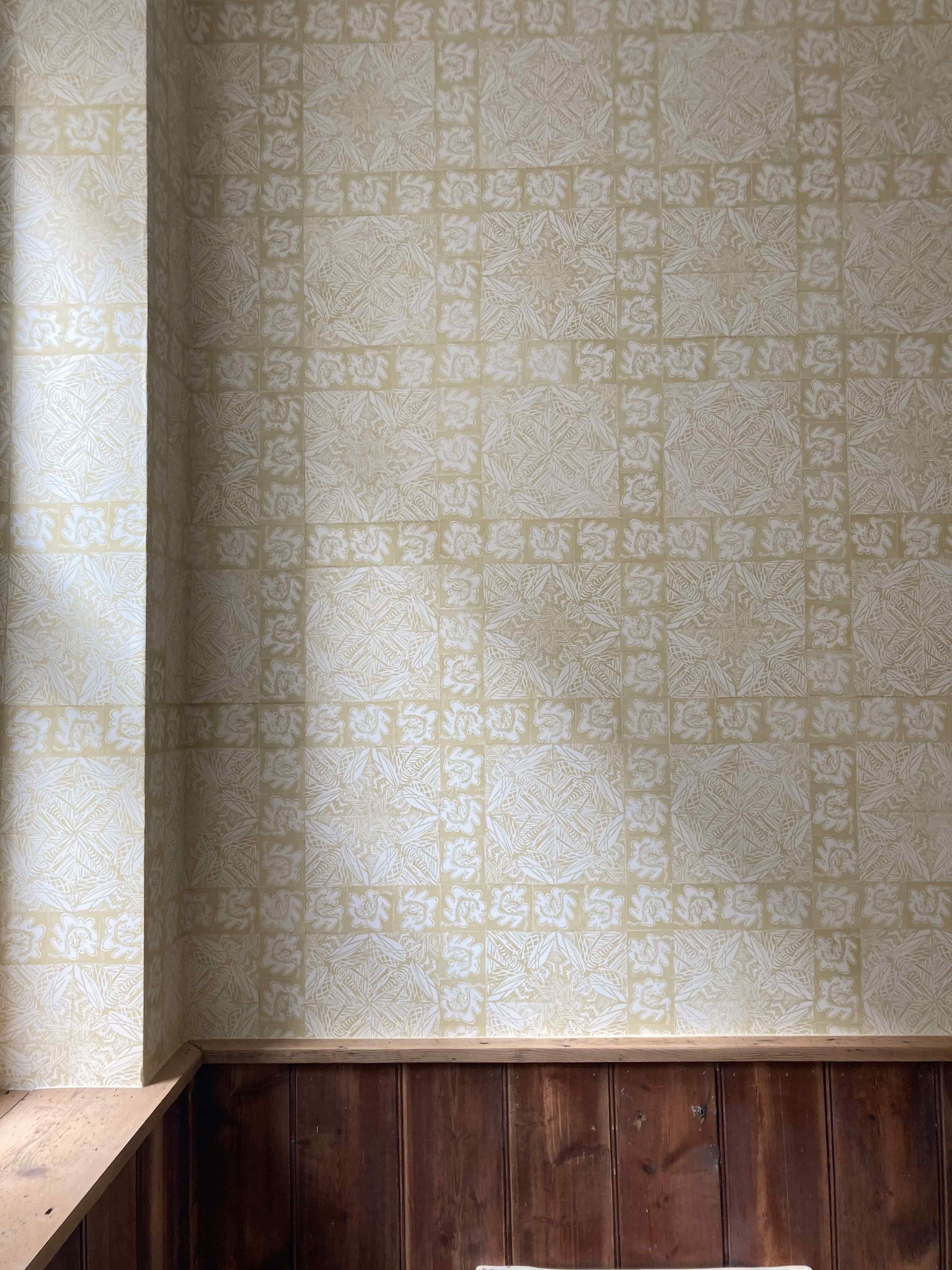 The wallpaper is installed in a room of very modest size and function but within a very grande listed roman­tic apartment. As guests perch to use the facilities I like the idea that the wallpaper may hold their gaze for a second or two and they may be taken off somewhere - possibly back to that fleeting moment of a coiled leaf falling from a tree or a leaping insect springing from its grassy meadow. 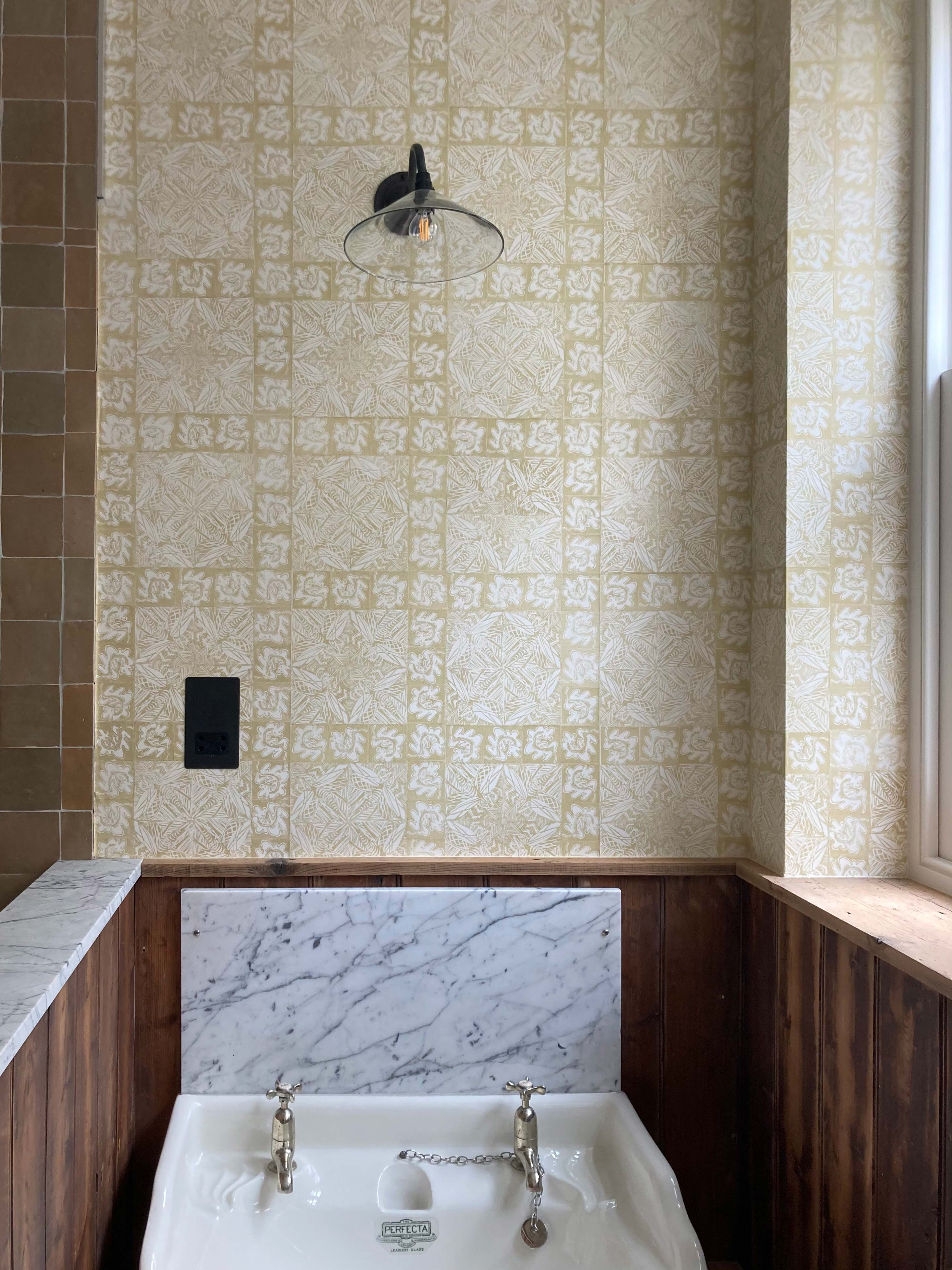 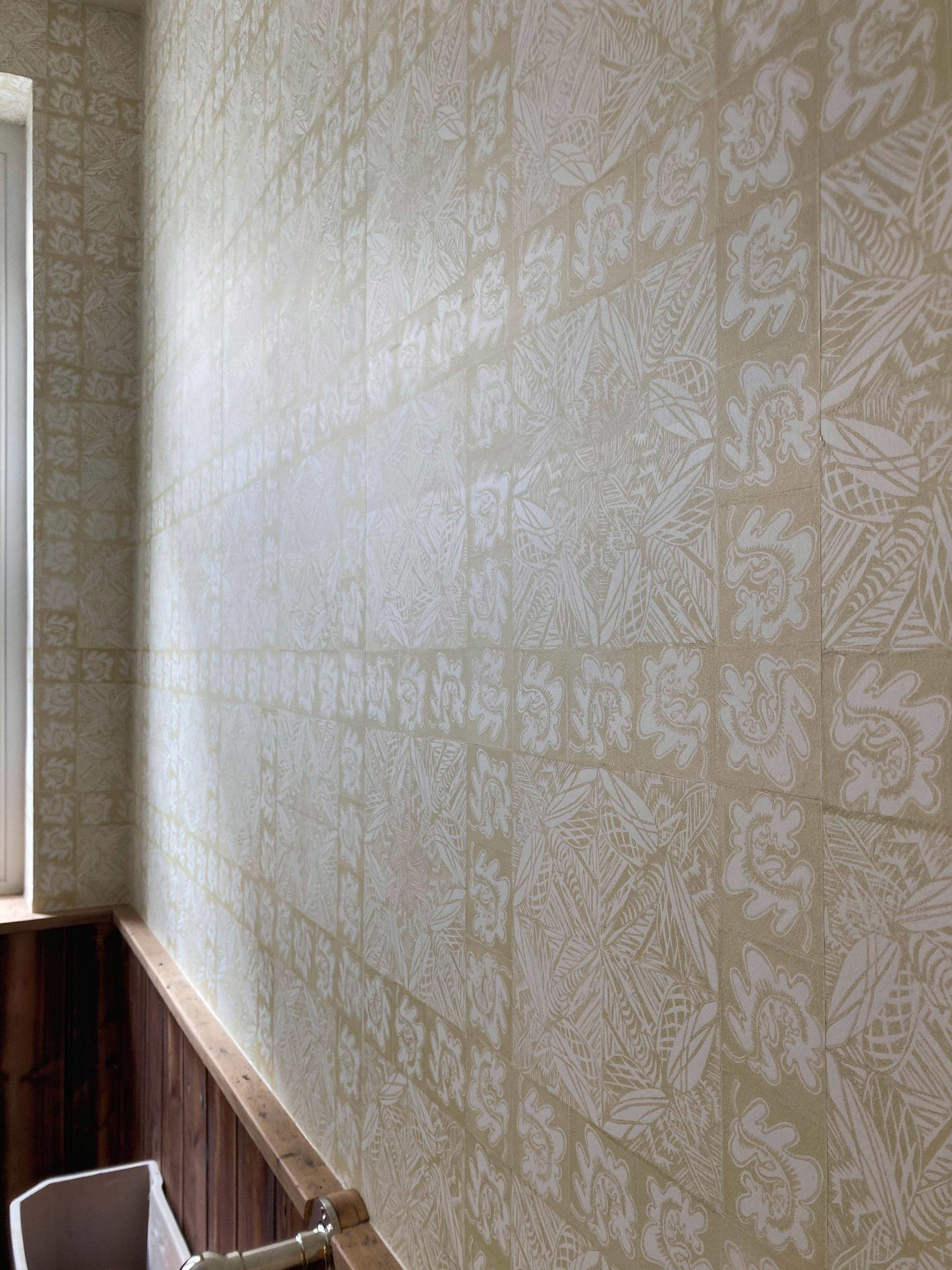 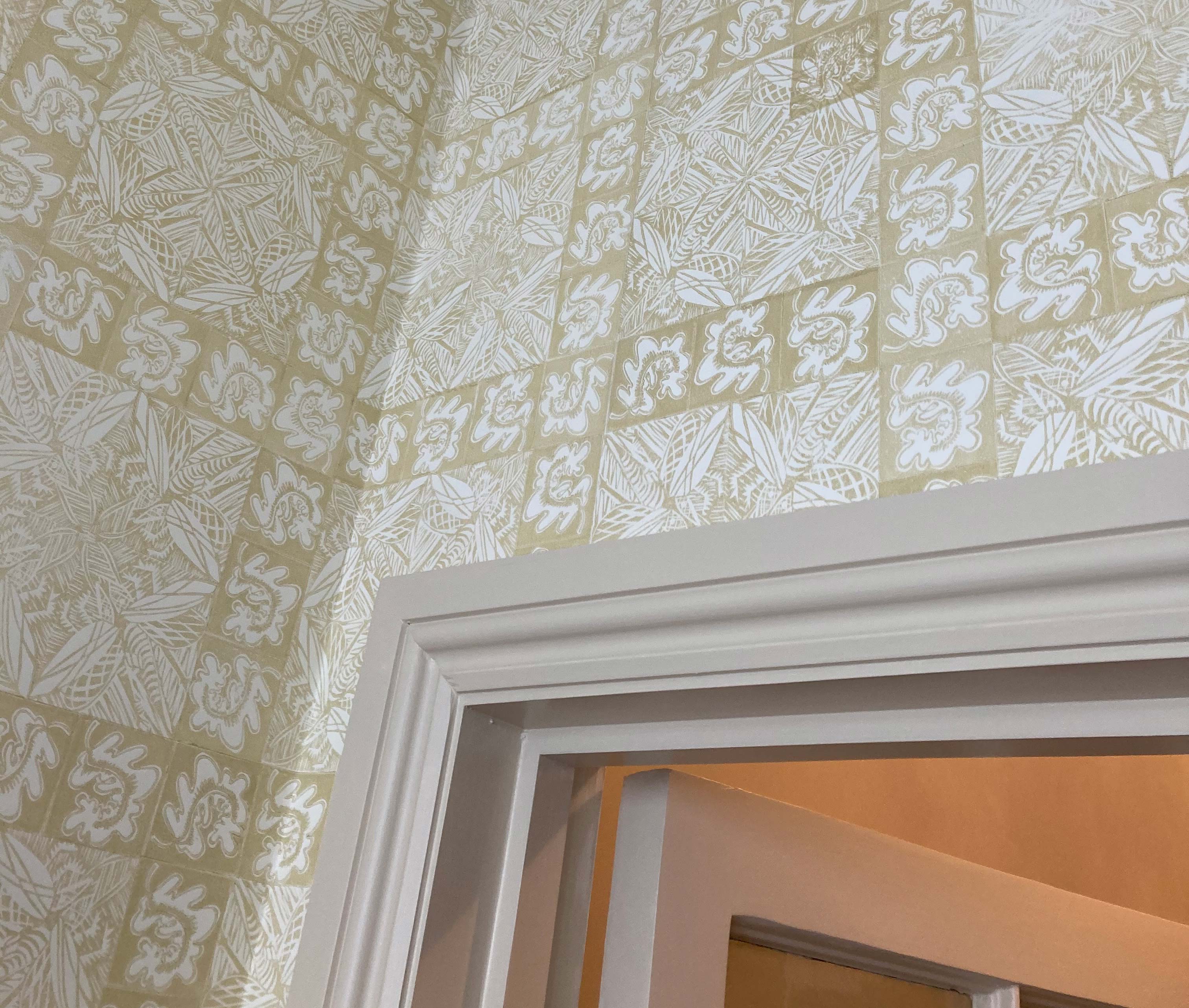