The Stuff of Life

All of us make or design stuff. Why do we do it and who for? I know why I make things; it’s quite simply what keeps me sane, especially now with reduced opportunity for socialisation and entertainment. A form of mindfulness, you could say. But who it is for – now that’s another question. And yet as a collector of ‘things’ myself, I value objects made by artists; often unsung craftsmen from other ages and different cultures. Like the Chinese porcelain, basket from Bali, textile from India or glass from Bohemia below. 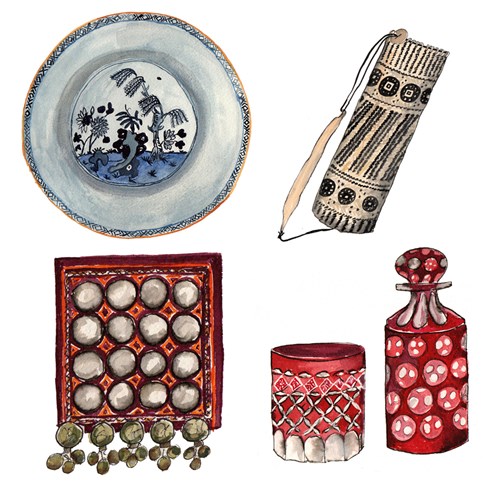 Two years ago I decided to do watercolour portraits of my belongings. Not every single one, but a representative selection, and then to tell their stories. I have written partly about their history, both in social context and their place in my life; and partly about how they are made and if they have a symbolic meaning. As I wrote, I also tried to tease out why people like me collect and where I am on the scale that stretches from museum connoisseurship to untrammelled hoarding.

What we choose to surround ourselves with tells others a great deal about us. We are experiencing this now as we scrutinise each other’s Zoom backgrounds. Guild-zoomers will have noticed on the dresser behind me, amongst the Delft, Kangxi and Imari, Bros Prue Cooper, Sue Binns and Suleyman Saba.

In fact, I am fortunate to have several pieces by Brethren which I have bought, swapped or been given. Some are impossible to capture, like this optical illusion cube by Master Elect Tracey Shepperd or the sawblades in Katharine Coleman’s paperweight. 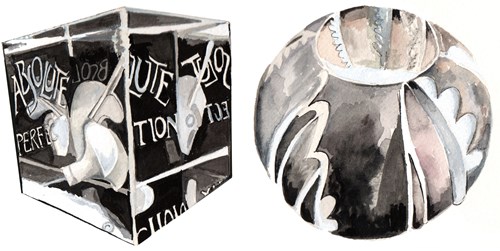 Or all my paintings which I did in a series of small 4 cm square details as the whole was too daunting. These below are all by Brethren, past or present or who had some association with the Guild (e.g. subject of a talk). 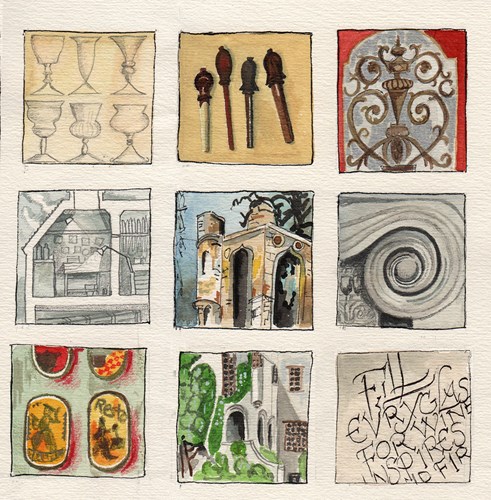 I don’t collect in an orderly fashion; I don’t strain towards getting all the examples in a series, or a complete set of anything, but certain items crop up all over the house. I painted 8 baskets, but counting every single log basket, picnic hamper, sheath, garden willow and place mat I find I have 91. I can’t walk past a basket shop without going in. Every reader will, I am sure, recognise that urge. I also appear to have a 'thing' about time.

I always did. Even as a teenager I’d wail, 'For at my back I always hear / Time’s winged chariot hurrying near'. How much more so now! So perhaps this book is a way of accounting for myself through the objects I own and have chosen to paint and write about. Perhaps it will cause you to look at your own stuff in a new way. Or think about the objects you create in the life they lead after you have let them go. It is the opposite of what the artist Michael Landy did in 2001 when he destroyed all the stuff he owned in a public happening held at C&A in Oxford Street: 7,227 items all catalogued in detail, from passport to Porsche, shredded and consigned to rubble. He was reducing himself down to bare essentials; my aim is to explore the permanence of the ephemeral. 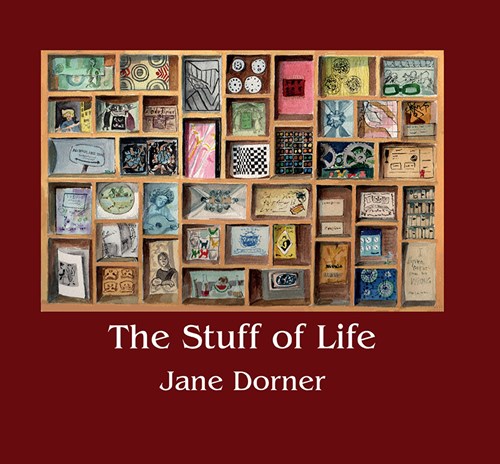 There are some 420 individual items and the book is self-published next week. This blog isn’t the place to advertise, but because all the proceeds are going to the Guild, whose income is reduced by Covid, I have been allowed to give details.

I am selling it for £20 including p&p to the UK and taking orders at: