He was a marvellous encourager of young talent, stirring them with sarcasm, demanding that they educate themselves better, pushing them into trying new ideas, while flooding their narrow minds with poetry. Ever surprising, he was not the greatest picture painter, but when he worked on paper with brush and colour, the result always had a special atmosphere and charm.

In glass, when he was able to do his own thing, he created gloriously active classical scenes to jolt our petty minds away from the everyday and into the strange, strong world of the great Grecian myths as well as the lovely Christian world of his deeply felt Catholic faith. 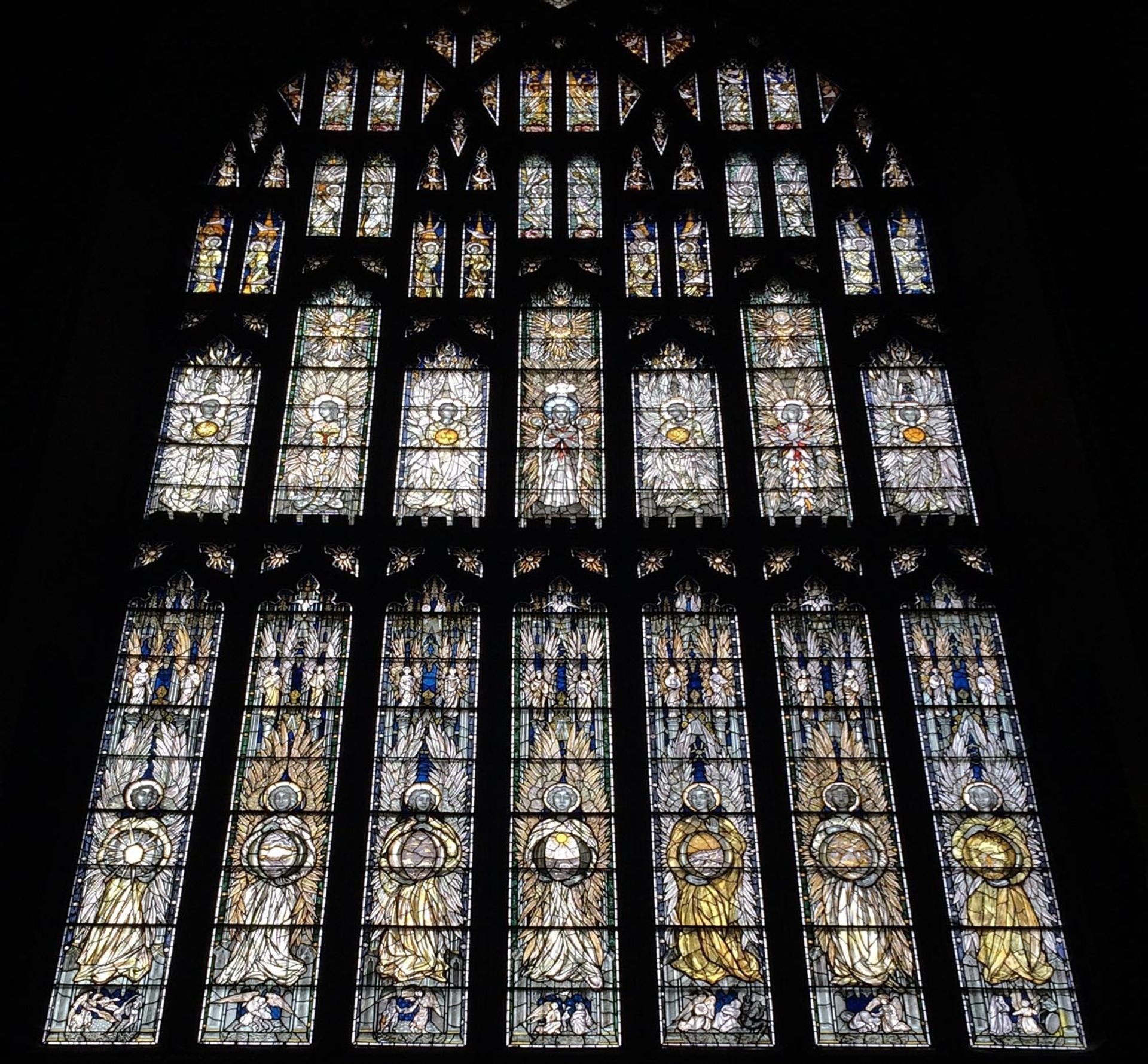 Angels attended him and he died aged 95 as his own Angel had foretold. Tho’ he did live an extra year from the ‘told’ date of 94. Patrick also told me that his Angel could be tough and described the experience of being roughly thrown against a wall in a tunnel in London as an enormous lorry thundered by.

His stained glass training took place under the kindly and fastidious eye of vastly competent and very garrulous fellow Catholic, Eddie Nuttgens, following studies in Edinburgh where he met Anne, his wonderful wife, of whom he always said ‘she’s the artist, you know’. Rumours about the way he met John Piper include John Betjeman telling Piper that ‘there’s a young man doing glass near you who knows about Matisse’ and ‘he’s learning to make stained glass windows, he might be useful’ followed by a glimpse of young Patrick buzzing down to Piper’s house with a folio of drawings on the handlebars of his bike.

Patrick enjoyed texture and bravura painting and strong colour and a fresh take on imagery and he responded with what must surely have been enthusiasm to Piper's designs. One vignette remains of Piper filling a bath with water, floating and stirring paint into it and then lowering paper into the bath so as to catch a mix of colours. Hung out to dry, these papers became perfect collage material. In fact, Piper was incredibly lucky to have Patrick’s enabling skills to hand in the process of transforming design and cartoon sketches into full sized, well-balanced stained glass windows. Patrick’s feel for colour was unequalled, as was his knowledge of Bible story and philosophy. In this context, he was often badly needed to interpret the ideas and suggestions of the priests and congregations with whom they were both working. 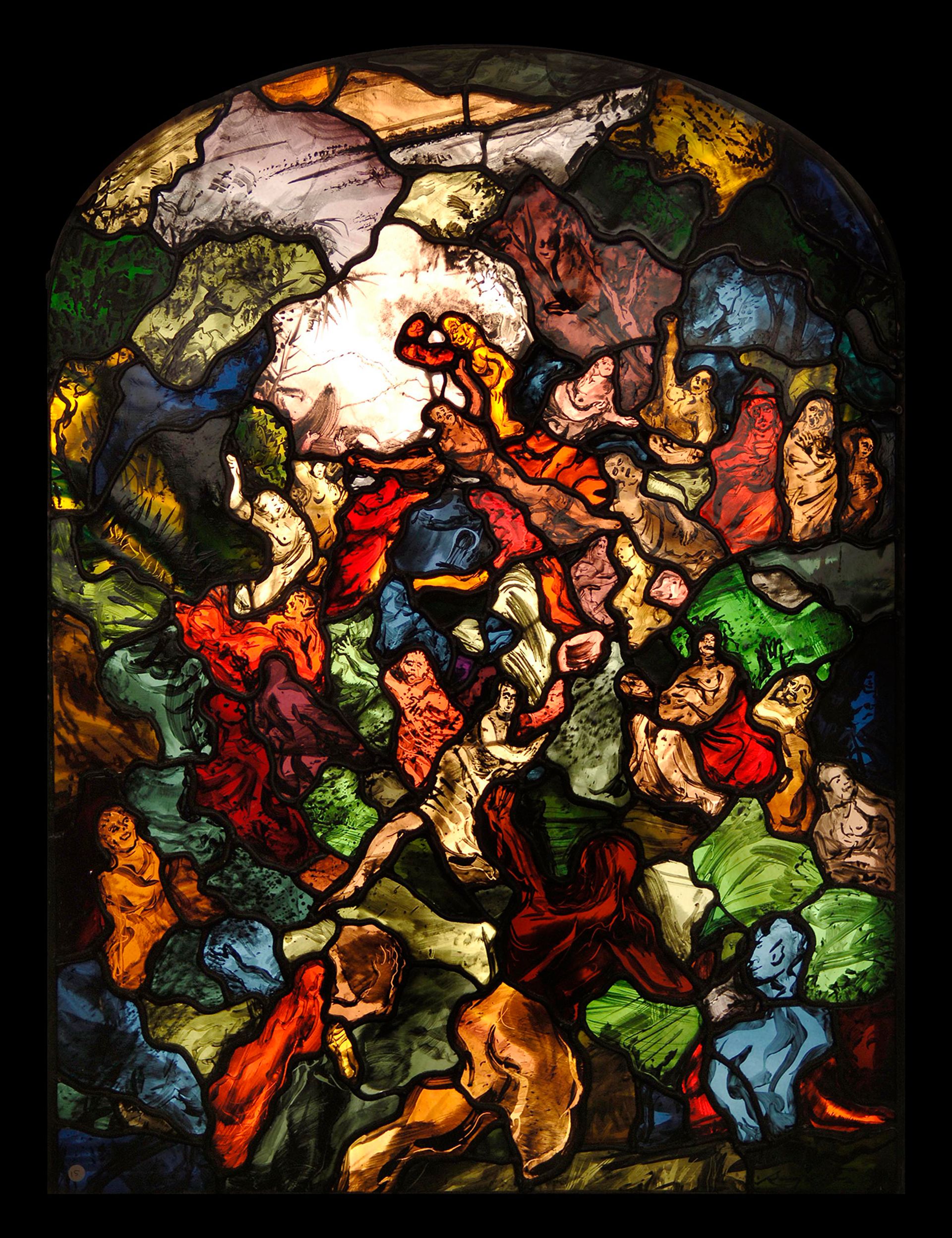 My favourite memory of Patrick comes from a moment in Iceland to which he and our Central St Martins glass students had been invited. Towards the end of quite a lengthy discourse on glass and architecture, Patrick emerged to confront the assembly waving a plastic ROSE in one hand and a TOILET brush in the other. There was a moment's astonished hush. Then Patrick said, loud and clear ‘Stained glass is all about THIS’ (waving the rose) 'and THIS' (waving the toilet brush)’. So true!

Patrick will be remembered by SO many artists, literally all over the world and his influence remains so joyous and useful too.

When I read the news of his departure in the paper and learnt how long he had lived, I was reminded suddenly of Catholic poet Gerard Manley Hopkins poem on Felix Randal, and wrote the following:

Just as the Angel told him
Patrick has lived to be 95
While working all the time.
Same Angel, thumping rescuer
From pounding lorry’s wheels
One day in London Town.
Or so he said. Great spieler Patrick.
Teller of truths, encourager of talent,
Made Piper’s paintings sing in glass.
Made younger artists rise and make
Such fine new work in many lands. 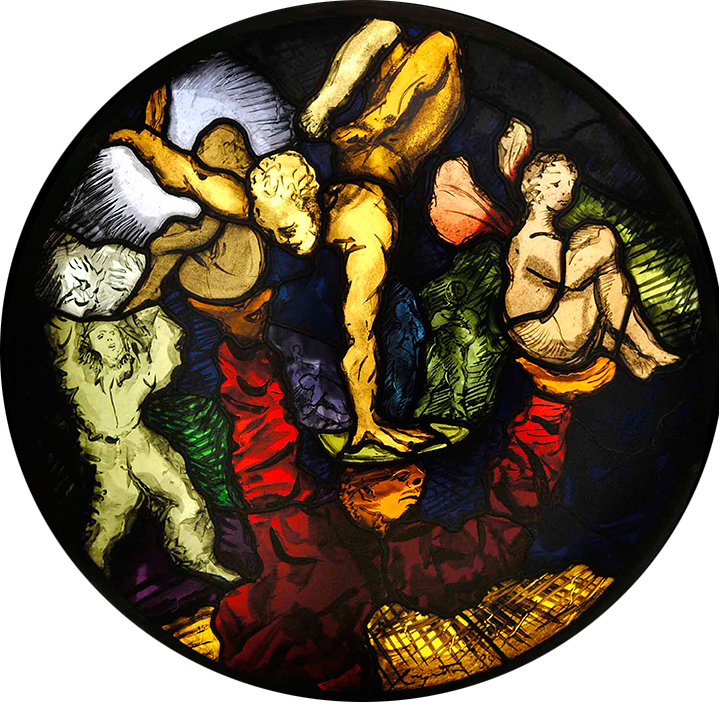