When lockdown came I started a painting that had been waiting 4 years. In 2016 I had a solo show in Hoxton, and showed 3 netball paintings. There was a fourth, but when the deadline came it was hardly begun. After the show I moved on to other work.

But I had done all the drawings for it – from life, of models trying to replicate the poses of netball players in full flight, and I had semi-worked out the composition. So I had everything I needed to start work. It took me some time to rethink myself into the painting, and to sort out what I wanted, but now it has developed its own impetus. 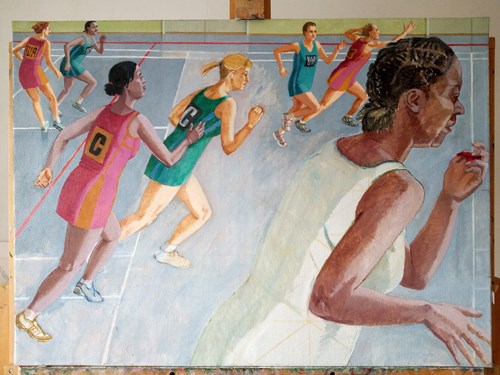 The idea for it was inspired by a painting by Evelyn Dunbar, the Queue at the Fish Shop. She was the only woman Official War Artist, but she wasn’t allowed to go overseas.

Something else entirely: I have visited Angers (Loire) three times to see what I think is one of the wonders of the world – the Apocalypse Tapestry. It is the earliest set of medieval tapestries still existing, woven 1375 – 80, and it is absolutely enormous. There are 7 huge tapestries, each contains 2 rows of 7 scenes.  (Seven is a recurring number, 7 seals,7 angels, the Beast with 7 heads etc).

The scenes are alternately blue and red, and are between two borders, heaven above with angels, and earth below, with birds, fish and small animals. The images are marvellous, inventive compositionally and full of strange things: Death on a pale horse, of course, shipwrecked boats and drowning men, frogs coming out of the mouths of 7-headed beasts, horse-like animals with lions’ heads and dragons’ heads at the ends of their tails where the tassels would be, ridden by knights trampling people underfoot. 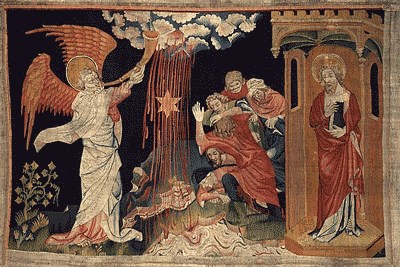 The Middle Ages was the high point of tapestry weaving. Only 5 warps per cm were used, and a maximum of 15 colours, the most light-fast available. The design was powerful, with distinct outlines and obvious transitions. By the 16th century, tapestry was imitating painting, using up to 15 warps per cm and more than 300 colours, many not light-fast. Hence the blue and brown tapestries full of brawny figures in many stately homes.
Over the river in Angers is another set of large tapestries, Le Chant du Monde (1957 - 1966), Jean Lurcat’s masterpiece. It is a 20th century apocalypse, the main and best part about the atomic bomb. 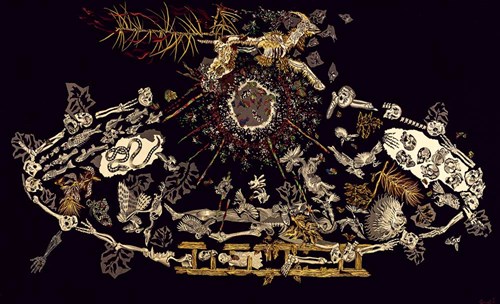 Influenced by the medieval work and using its methods, he aimed to restore to modern tapestry the qualities of the earlier work, to make something absolutely a textile and not a painting. He allowed himself 20 colours, a reduced number of warps and the banishment of perspective. He did revolutionise contemporary tapestry, becoming director of the Aubusson workshops and commissioning designs from modern artists. Still, it must be said, that PM William Morris had sought to do the same thing 50 years earlier. At the Merton Abbey Tapestry Works he reduced warps to 6 per inch, used a restricted colour range and a shallow pictorial space.

Years ago, before I had seen the tapestries at Angers, I wove one myself. It was a chair seat. I aimed for naturalism and used dozens of colours. It measures 36 x 46cm and took 200 hours to weave. There isn’t time in life for everything and I returned to painting and printmaking.