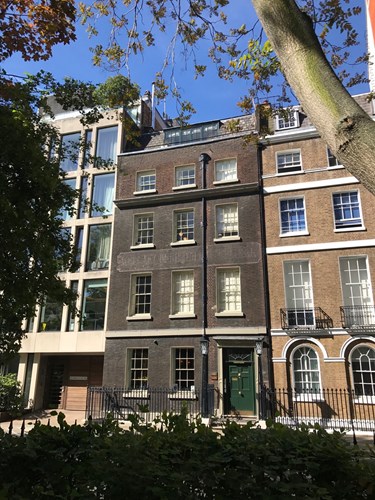 This year for Open House London the Guild will be holding walking tours on Edwardian Art and Architecture in Holborn and Bloomsbury, led by expert guides, conservation specialist and local historian Alec Forshaw, historian and Master of the Guild, Alan Powers and architect Karen Butti, leading expert on Smith and Brewer.

PLEASE NOTE ALL TOURS ARE NOW FULLY BOOKED FOR THIS EVENT

When the members of the Art Workers’ Guild celebrated the 30th anniversary of the foundation of their organisation in 1884 by moving into their own building at No.6 Queen Square, they were consolidating a longer history of the Arts and Crafts Movement in this part of London. We could trace it back to the time that William Morris and Edward Burne-Jones spent at No.17 Red Lion Square in 1856, near the Working Men’s College, later in Great Ormond Street, where Dante Gabriel Rossetti and John Ruskin were lecturers. In 1914, The Rebel Art Centre at No.38 was the home of Vorticism.

The London County Council’s Central School of Arts and Crafts was provided with a sturdy headquarters designed in part by its Principal, William Lethaby, a building opened in 1912, with its departments mostly headed by members of the Art Workers’ Guild, practising ‘learning by doing’ across a wide range of design and crafts. Other individual buildings of note on this part of the walk include No.12 Queen Square by Eustace Frere, 1907 and the Queen Anne style National Hospital for Neurology and Neurosurgery by Sir John Simpson, 1881-85 and 1938 extension with sculpture by Arthur Ayres. Stanley Hall, Easton and Robertson’s Nurses Home for Great Ormond Street, 1932, has a frieze by Eric Aumonier.

Much redevelopment took place in Bloomsbury between the wars, with Sir Herbert Baker’s London House (now Goodenough College), 1933-7, Coram’s Fields insertions to create a playground, 1936, and the School of Pharmacy by H. J. Rowse of Liverpool, 1939, close to J. M. Brydon’s Women’s School of Medicine, 1897-1900. Post-war Patrick Hodgkinson’s Brunswick Centre, 1972 takes us into Marchmont Street and a view of the magnificent back of the British Medical Association, by Sir Edwin Lutyens, 1912 (originally for the Theosophical Society) and on to Mary Ward House, 1898, a fascinating multi-purpose social project modelled on Toynbee Hall, the architectural debut of Cecil Brewer and A. Dunbar Smith.

At Woburn Square, the Warburg Institute, 1955-8 is a late work by Charles Holden, part of his revised scheme for London University begun with the Senate House, 1931-7. We finish with Heals, Tottenham Court Road, the original section by Smith and Brewer for Brewer’s cousin, Ambrose Heal, 1914-16, extended in replica 1938 by Sir Edward Maufe, decorations by Harold Stabler.

Alec Forshaw's book, An Address in Bloomsbury: The Story of 49 Great Ormond Street (Brown Dog Books), will be available for sale from the author.