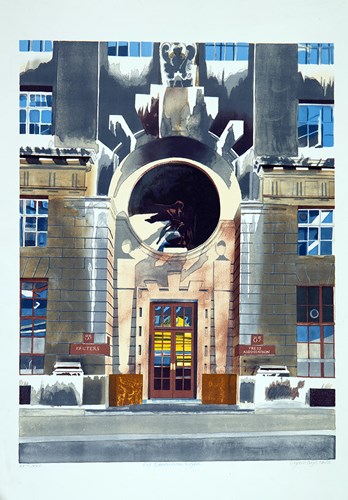 Please note that this exhibition is now closed to the public until further notice due to Government advice on the current Covid-19 Pandemic.

Paintings, drawings, prints, textiles, ceramics, carving, cutlery, and more, by members of the Art Workers’ Guild, past and present, from the personal collection of Master of the Guild Alan Powers.

Alan has raided the walls and cupboards of his house to produce an exhibition of work by AWG members going back to the 1880s. In some respects random and unrepresentative, it is nonetheless instructive about some of the characteristics that have recurred through the decades: a relationship to the past (from F. L. Griggs’s Gothic fantasies to Glynn Boyd Harte’s celebration of Lutyens); a commitment to art in the service of people (especially mural studies); the rural and urban pastoral (Reynolds Stone and Richard Sorrell); the process outshining the product (studies rather than finished works); the elevation of the everyday through decoration (pottery, textiles and cutlery); and the sheer delight of a satirical architects’ pantomime programme by Beresford Pite and cardboard models made from designs by Edward Ardizzone and Rowland Emmett.

Viewing is by appointment only.  Please contact Leigh on leigh@artworkersguild.org to book.

Exhibition will feature work by: