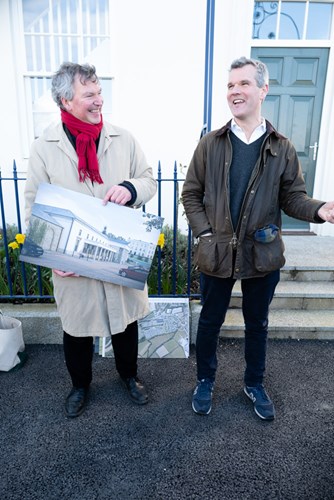 I can’t end my account of the Cornwall week without talking about our visit to see the new development on the eastern edge of Truro by Bro. Ben Pentreath. It was great good fortune that Ben, who is notoriously hard to pin down, was actually going to be there anyway on the same day, showing round a group with whom he is working on the Tornagrain project near Inverness.

I suspect that many of you will know Ben in person, or perhaps through his very popular blog, mostly about his rural retreat, the Old Parsonage at Little Bredy in Dorset. The first I knew of Ben was an elegantly cursive letter that arrived for me when he was an art history student in Edinburgh in the early 1990s, asking my advice on his dissertation subject, an interesting 1954 building in correct classical style by William Kininmouth, who was normally a Modernist. A few years later, Ben had gained much practical experience as a designer with Bro. Charles Morris in Norfolk, who had persuaded him to abandon art history and do the thing for real. He was persuaded to add some polish (which he really didn’t need) at the Prince of Wales’s Institute of Architecture, where I was then teaching. He added joyful anarchy to an already freewheeling establishment, while also asking searching questions about what people were doing there. However, one year of even this very alternative kind of qualification was enough for him, and he has continued to practice quite happily in the role of an architect without the official title that others slave, often unproductively, to attain.

Ben now operates on several fronts – as a designer of private commissions for new buildings and alterations to old ones, about which he has lectured the Guild in recent years. He has a semi-separate practice for interior design, he writes books and newspaper articles, and runs Pentreath and Hall, the shop in Rugby Street that started almost by accident in what was meant to be an annex to his office, offering enticing morsels to decorate your home. He has also played a significant role in the design of housing developments, mostly for the Duchy of Cornwall.

Which brings us to Truro. This is a very special town, in a river valley at the head of the Fal estuary, ringed by hills, with the noble Victorian Gothic cathedral jostled among the narrow streets as if it were in Northern France. Truro is popular for shopping, and often flooded with holiday visitors when it rains (as it often does). The County Council built one park-and-ride to ease congestion on the west side, but as a lot of visitors come from the opposite direction, it wasn’t enough. They searched for sites, and settled on a beautiful valley near the intersection of several main routes. The land happened to belong to the Duchy of Cornwall, who initially opposed the scheme, but finally had to give way. Along with the car parking and bus access, a site was found for a Waitrose supermarket and the opportunity was taken to build part of the extra housing allocation required by the government. 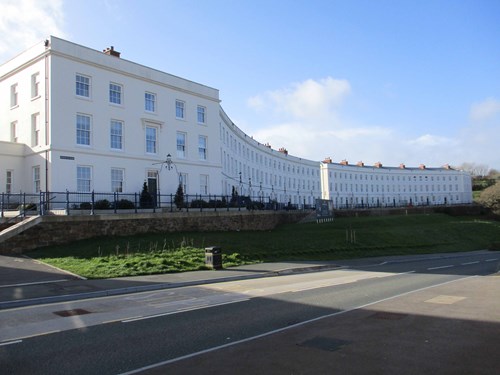 All this sounds like business as usual, but a number of factors have lifted it up to another level. A consortium of local farmers wanted space for a covered market, and so were allocated one end of the Waitrose. Ben devised the buildings for this, and also the housing, which is at the head of the valley. He saw the need for a clean edge, unlike the normal straggle produced by development, and following the contour of the land, proposed a Royal Crescent, which enjoys something of the same quality of landscape setting as the famous one at Bath. As so often with Ben, this proposition was cheeky to the point of outrageous, but actually the right one, and now it stands complete in two sweeping halves, white against the skyline. The cars in the lower foreground might be deemed a slight shame, but there are some trees waiting to grow, while the distant views would distract your attention.

Behind the crescent are a few streets of houses, some of which face onto a square with a stone-walled garden. The original proposal was to offer allotments in this space rather than the conventional grass and shrubs. Once it was built, the developers took fright at the prospect, but when they asked the householders, several said they had moved their expressly because of the allotments, so these are on course to happen. The houses themselves are mostly three-bay fronts with central doors, stepping down the slope with minor variations in design and painted in a range of colours. The result is already a much more lived-in look than you normally get in a new place, but without the irritatingly predictable ‘assortment box’ scattering offered by housebuilders (and, dare I say it, in much of Poundbury). It looks and feels local, because these are the house types found in Truro’s most beautiful street, Lemon Street, climbing the hill to the old Falmouth Road. 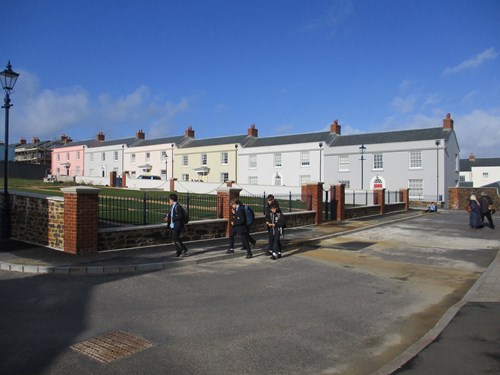 Many of my group approached with caution and scepticism, unwilling to accept this as the right answer. I think they went away convinced on several levels by Ben’s detailed account of how the whole project had been thought through. I haven’t described the Waitrose, which has a Doric portico and pediment over the entrance, with real granite columns. This has the benefit of leaving you in no doubt where you are supposed to enter. When the proposed upper story on this building was axed as a cost saving, Ben offered to sacrifice the portico, but it was too late, as the commission to the local granite quarry had already been publicised and couldn’t be cancelled. We were joined on this visit by Julian Holder, an architectural historian friend and colleague of mine who recently moved into the area. Arriving late at night after a long drive, he and his partner stopped off at Waitrose to get supplies. He couldn’t believe that such classical stage scenery could be solid, and suffered for his disbelief by unwisely giving one of the columns a good punch to test it. 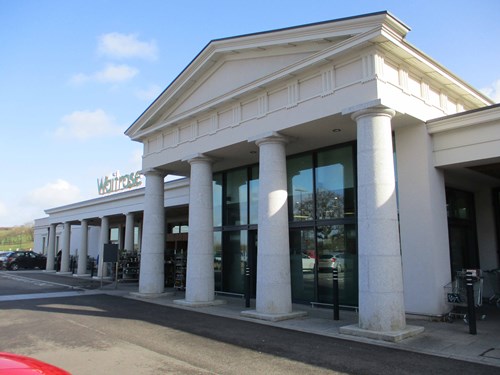 The Doric Columns of Waitrose. Image by Bro. Rory Young