Coming out of the West
Master Alan Powers

I was pleased that when 19 sturdy Guild members went to Cornwall last week we were not just looking at old things, lovely though they were, but meeting people and hearing about their activities in the present. These were inspiring and exciting and representative of the kind of thing we all care about, so I thought I could beguile a quarter of an hour of enforced solitude by telling you about them. 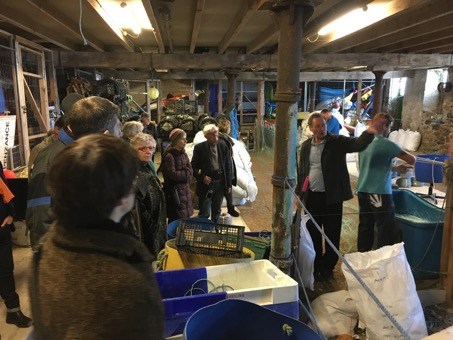 On our first morning in St Ives, we visited the Porthmeor Studios. The building, we were told, has about 50 different phases of construction and alteration, including the incorporation of iron pipes and long wooden shafts from redundant tin mines, plus stone, brick and timber.

When Bro M J Long was commissioned to make it stable and watertight by the owners, the Borlase Smart John Wells Trust, she was keen to retain its character and the Trust, led by Chris Hibbert (gesticulating on the right) who showed us round, realised the importance of keeping a space for the fishermen who were on this site before the artists. I could tell you a lot about pilchards, but for now, you can see fishermen using the space for setting nets – stringing them onto lines with floats, each calibrated for a different catch. Upstairs, we saw a couple of the studios which are used with a mixture of long-term and short-term residencies. The light coming straight off the water outside the windows is fantastic, and the artists we saw were actually using paint and colour, which seems a rarity these days.

At the Leach Pottery, also in St Ives, the whole historic site was threatened with redevelopment as housing in the late 1990s, but owing to a listing for its historic associations, it was possible for the original workshop buildings to be saved as a museum, while a new working pottery, education room, display space and shop were added. Bernard Leach started working there in 1920, and there is no other place with such strong associations with the craft pottery movement that he did so much to influence.

We had an excellent tour, enhanced by expertise from the group (David Birch and Emma Barker in particular). Please post more pictures! And most people went away with something from the shop. I got about the smallest thing I could find, a tiny John Leach jug to add to my display at the Guild ‘The Constant Art Worker’, plus a soap dish with draining holes in it which has been much in use since I got back home. 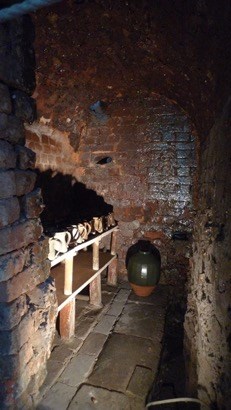 This is the lowest chamber of the Japanese-style ‘climbing kiln’ built for Leach by Tsurunosuke Matsubayashi. The firebrick lining has become glazed over many years of use.

Here is one of the labels from the treadle wheels that Bernard’s son David invented to make throwing more controlled and effective. 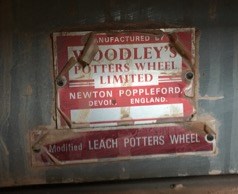 On Thursday, we were in Falmouth and had the delightful experience of visiting the workshop of Keith Newstead, a maker of automata. In case you didn’t know, Falmouth is the world centre of automata and the place where Cabaret Mechanical Theatre began. I somehow failed to take a picture of his current project, based on a Rowland Emmett cartoon, but this one gives you the flavor. 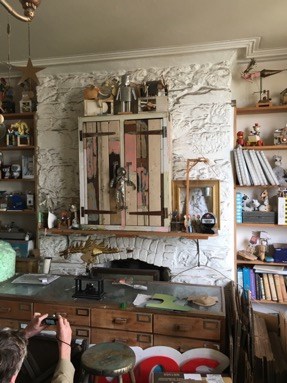 On Friday, we started the day in Newlyn, and thanks to Bro Ruth Guilding’s introduction, we were able to visit Michael Johnson at The Copper Works. Michael arrived from Australia, after running a male dance company in his 20s, and developed his metalworking skills through his English-based uncle who made armour for films. In 2004, Michael re-started the copper-beating tradition in Newlyn that goes back to the 1890s. I was especially excited about this as I inherited some pieces of furniture decorated with art nouveau leaves, fronds and flowers that might have come from here. 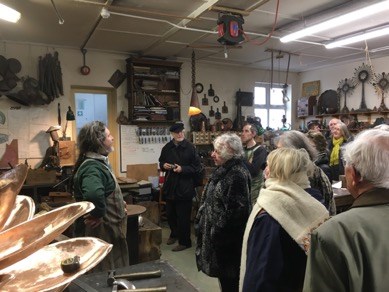 We were all impressed by Michael telling us that he has always encouraged children and teenagers to come to his workshop after school for no charge, and many have kept on coming as they love working there. In the foreground is a big fountain made of brass for a garden festival (Chelsea?). Being a bit typographic, I liked the plaque on the piece underneath it – part of a tank for a distillery. They called it Dennis after Dennis Hopper. 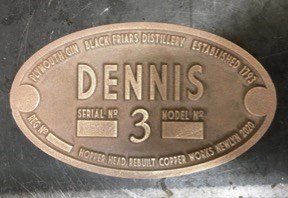