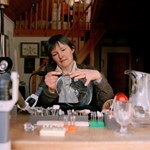 Tracey Sheppard studied English Literature and Fine Art at the West London Institute of Higher Education for a London University BA Hons. She began engraving at evening classes in 1980 whilst studying and was elected Fellow of the Guild of Glass Engravers 1987, of which she became Chairman (1998 – 2002). She lectures on behalf of the Guild and has exhibited in all Guild National Exhibitions since 1983.  She teaches at Edward James Foundation, West Dean College and in local adult education.

Her commissions include pieces for Ampleforth College; the BBC; Chelsea Physic Garden; Civil Aviation Authority; Eton College; Hampshire County Council; Hilliers; Winchester College; the Dean and Chapter of Winchester Cathedral; the World Meteorological Organisation and the Royal Horticultural Society.  Her work has been presented to Her Majesty the Queen Mother, the Sultan of Oman and the Duchess of Gloucester. Recently, the Historic Royal Palaces commissioned a piece to present to Her Majesty the Queen at a ceremony to mark the Tower Hill Improvement Scheme.