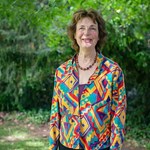 Barley Roscoe is a consultant curator, writer and lecturer specialising in the Arts and Crafts Movement and in 20th century British crafts. She set up the Crafts Study Centre within the Holburne Museum of Art, Bath where she was Director from 1986-1999 and was awarded an MBE for her work there.

Her most recent publication, Ernest Gimson: Arts & Crafts Designer and Architect, written with Annette Carruthers and Mary Greensted, was published by Yale University Press in October 2019.