The letters of Pliny the Younger (61-113AD) a prominent lawyer and administrator of the senator class constitute a remarkable self-portrait from Classical Antiquity. Pliny owned a number of properties but his villa at Laurentum appears to have been his favourite, writing it is 'such a joy to me'. His description (Book II-17) lists the rooms, the relationship to one another, and their orientation, but he says nothing about size, decoration, character, etc with the result that for centuries many have tried to recreate visually that which only survives in words. The recreations vary wildly: some vast, almost like Diocletian’s Palace; some more intimate; some regular and symmetrical; some rambling. Making architectural sense of Pliny’s description is the greatest challenge – if one literally follows what is written one ends up with a chaotic plan that surely was never built.

And that is why the recreations vary, everyone does some editing and ordering making the Villa more like how they wish it had been. I’m no exception, my version follows Pliny more closely than many, respecting his orientation of rooms and relationship to the coast, but all is inevitably skewed by my preferences. 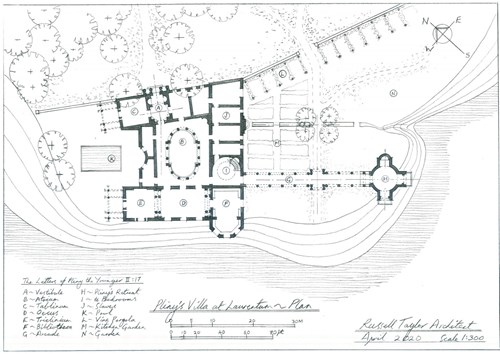 We start at the front door. Palladio believed Roman villas were characterised by a use of columned facades thereby establishing a tradition of grand domestic architecture that continues to this day. Palladio was wrong, but it’s hard to shake off a convention and my design has a shallow portico positioned in a long, high wall. The portico is the only decoration- a portal indicating the nature of the interior within. The visitor travels through the natural countryside eventually meeting the wall and the portal. He passes through the portal and enters a different world – a world ordered by man’s intellect and artistry. 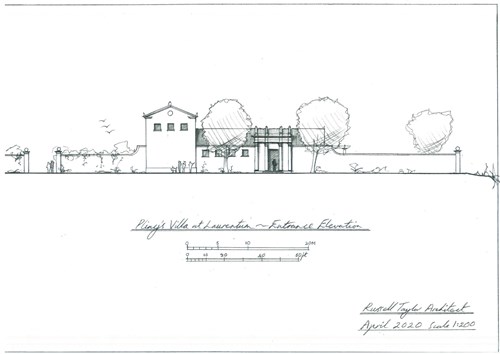 From the entrance door one goes through the Vestibule, the Atrium (with ‘D’ shaped ends) and into the Oecus (drawing room or living room). Pliny has this sequence ending in the Triclinium (dining room) he makes no mention of an Oecus. However, I’ve made the Oecus the most important space, the end of the entry sequence, because this is a family home. (This is introducing a modern sensibility.) Opening off the Oecus are the Triclinium and the Bibliotheca (Pliny’s library). The three most important rooms are then all in close association.

On the left as one goes through the Atrium there are Cubiculae (bedrooms). Pliny has them on the ground floor, but I’ve introduced another modern note by putting them upstairs.

The Romans valued regularity and proportion and this is reflected in my design. The Vestibule is a perfect square with a shallow circular dome above. The centre of the Atrium is a square, the ‘D’ shaped ends, half circles. The Triclinium is also a square and the Bibliotheca a square with a half octagon added. Between them the Oeus is in the proportion of the Golden Section (1:1.618). There’s no evidence that this ratio was ever recognised or used by anyone before the 19th century – I just use it to show how cutting-edge I am. 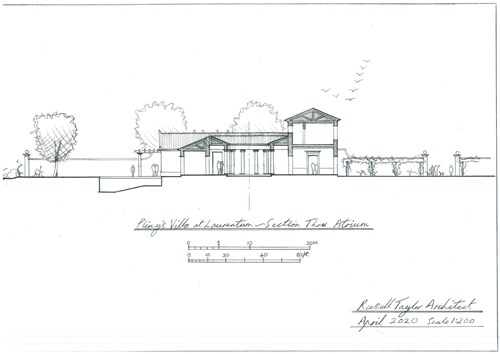 Away from the main body of the Villa, but connected to it by means of a covered arcade, is Pliny’s Retreat – a place where he can write in peace away from all distractions. It’s the patrician equivalent of a writer’s shed beloved of Roald Dahl, Simon Armitage, et al. I’ve shown the Retreat as a circular room with arms making the shape of a Greek cross. Pliny could then position himself wherever he liked to catch the light and the view from sunrise to sunset as he wrote.  He valued writing above everything else to him it was the most important part of the Villa. 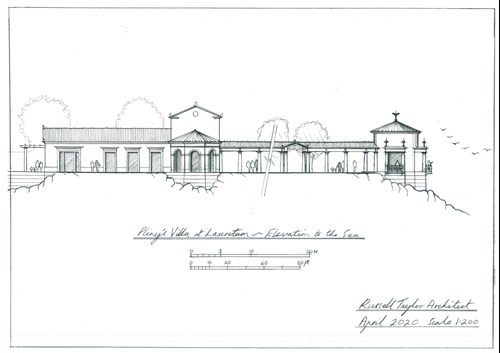 Pliny would surely never recognise what I have drawn. But if it could be explained to him, he would surely be flattered as evidence of the continuing interest in the letters he so carefully left to posterity.